He's done television (Channel One, the news network marketed to middle schools and high schools, and its parent company, Primedia Television). He's done digital (Digital Entertainment Network, an early but short-lived venture to create TV-type content for the Internet). He's even done sports (four years as commissioner of the Ladies Professional Golf Association). But during his varied career, Jim Ritts had yet to work in the performing arts, and now he's getting his chance. Ritts has just been named as the man to succeed Ken Stein as executive director of the Austin Theatre Alliance, which jointly operates the Paramount and State Theatres.

Ritts considers it a natural fit. In a recent interview with Community Impact Newspaper, the University of Texas alum dates his deep love of live performance to his teen years and said he attended live shows at least twice a week when he was living in New York. He also had served on boards for the Signature Theatre and Joffrey Ballet while there. He finds the job of running the Austin Theatre Alliance, he's quoted as saying, an ideal "blending of my entrepreneurial and business skills with my lifelong passion for the performing arts."

As previously reported, Stein is relocating to Dallas with his family. After helping with Ritts' transition into the job, he'll leave Austin in early June. For more information, visit www.austintheatre.org. 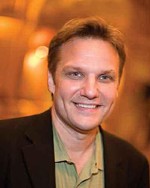