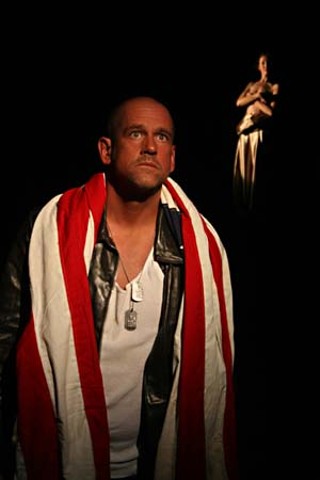 Something is distinctly off-balance in Capital T Theatre's production of Sam Shepard's A Lie of the Mind. Two houses dominate stage right and stage left in Paul Davis' set, and each is tilted precariously downward. Where the design lacks subtlety, it gains efficacy: In both houses, families are living a life that is very much not on the plumb line.

Jake (Kenneth Wayne Bradley, who, with that face, may well have been cloned specifically for the purpose of playing troubled characters in Sam Shepard plays) has snapped and beaten his wife, Beth (Rebecca Robinson), so severely that he's not sure whether she's alive or dead. He's thrown into spasms of guilt and dread. Turns out she's alive, but just barely. With the help of her brother Mike (played by artistic director Mark Pickell, who also directs this production), she learns to walk and talk again. Both she and Jake return to their respective family homes to heal in the bosom of ... well, it's a Sam Shepard play, so it's not exactly their parents' loving embrace, but it's a roof and some walls. Might even be some food, if you're lucky.

From that point, A Lie of the Mind is similar enough to Shepard's better-known play Buried Child that it's almost as if it were rolled from the same dice. Mixed-up families whose members don't listen to one another, men paralyzed by physical disabilities, harsh and rural surroundings ... check, check, and check. A Lie of the Mind differs from the earlier play primarily in that it gives its female characters more of an arc, and it hones in on the ways that these people lie to themselves just to survive their days. A Lie of the Mind also plays with the symmetry of its characters' journeys, suggesting that change is often illusory.

With two intermissions, this production runs long at three hours. The show boasts a strong cast, but after two and a half hours of stymied family relations, even the best revelatory monologue begins to drag. With due attention, however, the audience can gain a bundle of insights into a particular sort of human experience, one in which love and kindness are rare commodities.

Among several good performances, Travis and Melanie Dean (who are married) stand out as Baylor and Meg (also married), if for no other reason than because it's so adorable to see them playing two people who put up with each other as a matter of routine. (One assumes the actors' marriage is better than that of Baylor and Meg or else they'd never have survived being in a play together.) Cuteness aside, Melanie Dean's moments of quiet confusion provide the play with a necessary change in texture, making it possible to find a redeeming thought here and there in two households that each verge on self-destruction.