Katherine Catmull on her 'Back Pages' 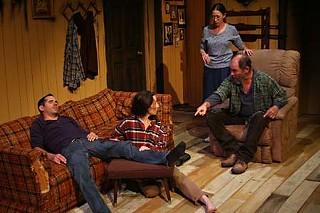 Summer 1988: My then-boyfriend Ken Webster directed me in Sam Shepard's A Lie of the Mind, a brilliant, shattering, weirdly hilarious play about two screwed-up families and the catastrophically screwed-up marriage that binds them. The first production of our Subterranean Theatre Company, it was a sellout hit and a watershed role for me: The show won several B. Iden Payne awards, including Outstanding Lead Actor and Actress in a Drama for Ray Weikel and me, respectively, Weikel as Jake, an abusive, guilt-crazed husband, and myself as Beth, the wife he has beaten into brain damage.

Barbara Chisholm played Sally, Jake's sister; a few months later, Barbara and I were in a much jollier play: Love's Labour's Lost, in an Austin Shakespeare production directed by her then-new husband, Robert Faires. We performed out on that big rock in the middle of the soccer fields in Zilker Park, wearing summery 1920s dresses. Barbara was radiant as the saucy Rosaline, while I played the more straitlaced Princess of France.

Here's the weird part, and the point of this story, at which I have finally arrived: This month, two decades and change later, having long since married my director boyfriend, those two plays are being revived in Austin, A Lie of the Mind by Capital T Theatre under the direction of Mark Pickell, and Love's Labour's Lost, again by Austin Shakespeare and again directed by Robert, now the Chronicle's Arts editor.

All the grief and hilarity of A Lie of the Mind roared back at me across 23 years when I watched a recent rehearsal of Capital T's lovely production. How particular and human are these characters; how completely themselves, even as they echo one another. "Who's Jake?" asks Beth's bewildered mother, slipping into dementia. "Who's Beth?" asks Jake's mother disdainfully, turning her back squarely against reality. The families try to reabsorb and infantilize the miserable couple, Jake's mother spoon-feeding him with helicopter sounds while Beth's brother teaches her to walk.

"Did they bury me in a tree?" Rebecca Robinson cried as the disoriented Beth, wrapped in hospital gauze. Tears jumped into my eyes. And when she wailed about her abuser, "He's my heart!," it killed me, just killed me dead. That was me once. I mean, not really me, of course – but no, yes, really. That was me.

Revisiting a past both traumatic and beloved – is this what high school reunions are like?

That rehearsal was early on a Saturday morning; with a cast of sought-after actors, you work around their schedules. That same night, at Zilker Hillside Theatre, I saw Robert's decades-later revisiting of Love's Labour's Lost. It was lighter than ours, more wickedly funny. Instead of the 1920s, we're in 1963, at a long beach party chilled to a halt by the death of a great king. How funny: I had not remembered just how few scenes the women were in.

But in the last scene, when Nancy Eyermann's Princess – newly informed of her father's passing – rejects her suitor's hasty proposal, saying, wryly, sadly, "A time, methinks, too short/To make a world-without-end bargain in," that goddamn lump rose up again in my throat.

Love's Labour's Lost ends with a melancholy song as the lovers part, unsatisfied. In this production, Robert has set Shakespeare's words to the tune of Bob Dylan's "My Back Pages." I lay on the grass watching a drifting quarter moon, listening to Will Hollis Snider's lovely countertenor. Behind Shakespeare's words, I heard Dylan's chorus: "But I was so much older then/I'm younger than that now."

READ MORE
More A Lie of the Mind

A Lie of the Mind
While maybe not Sam Shepard's best, the play has worthwhile material to chew on