For the new choir in town, eight is enough

To hear James Morrow speak of early music's "soaring lines and lines cascading over one another," creating an aural picture of "reaching toward or yearning for God or some spiritual force," is to understand why he's chosen to form a new singing group dedicated to choral works of the Renaissance and Baroque eras. This is music "that is transcendant, that touches people in a very deep place," says the longtime director of choral activities in the Butler School of Music at the University of Texas.

So, despite his full plate on the Forty Acres leading the Chamber Singers and Choral Arts Society, and despite a less than hospitable economic climate for launching cultural ventures, Morrow has created Ensemble VIII, a professional chorus of eight singers that will explore the polyphonic music of Europe from the 15th through 18th centuries. "There's no bad time for making good music," says Morrow, noting that the choir's small size and lean nature should help it get a footing in tough times. And tough times may actually be a plus for a group specializing in early choral music, adds Donald Meineke, a graduate student in choral conducting who is singing tenor in the ensemble and serving as its executive director. "This is music that does soothe the soul. There's a kind of healing quality to it," he says. "This is something that the world needs right now."

The choir's size was deliberate on Morrow's part – its starting point, in fact. "I wanted a group that is very small, that is highly virtuosic," he says. "Eight allows us to do double chorus music and cover the vocal division of most of the repertoire. It's the perfect size for singing this music." It also puts Ensemble VIII in an elite category among professional choirs. Most, such as Austin's Conspirare or Dallas' Orpheus Chamber Singers, are much larger. You might have to go to the East Coast to find another this size. That should make it easier for the group to tour – one of Morrow's goals. Following the ensemble's debut this Friday in Austin, it will perform the same program – a smorgasbord of Italian, English, and Franco-Flemish Renaissance works – in San Antonio. The group will also take concerts in spring 2012 to San Antonio and Dallas.

The eight singers of the ensemble are not only singing together in concert for the first time this week but also singing together for the first time, period. Their first rehearsal earlier in the week was the first time Morrow had assembled them in one place; he hired them separately based on his familiarity with them as individual singers. But don't imagine that he had any concerns about their ability to coalesce as an ensemble. "I know their voices. We've selected them very carefully. These are highly experienced and highly accomplished singers," he says. "There is a small core of this caliber singer that sings around the country. It's easy for them to come together and blend."

And the results of that blending will be divine, as anyone familiar with the splendors of early choral works can attest. And for those who don't know them ... well, insists Meineke: "This is music unlike any you've ever heard. And even though it is so ancient, it will be so fresh to your ear, a completely new experience." 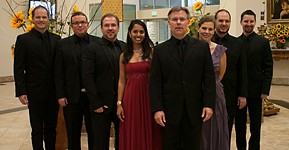