‘As Above So Below: The Art of the Secret Society’

This collection of arcana from various fraternal orders is seriously impressive 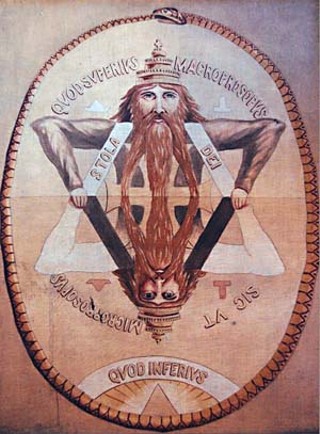 As Above So Below

Though I had heard vague rumors whispered in the halls of the nearby university, though certain signs within the Book of Faces had vouchsafed an indication of what a seeker might encounter deep within the demesne of Domy Books – its painted exterior rising vivid and boxy from a familiar position at the corner of Cesar Chavez and San Marcos Street, there on the long-storied Eastside of Austin, Texas – though, some armchair philosophers in their nightly cups might have suggested, I should have suspected what I would find therein, the eldritch magnificence of Domy's current exhibition was sufficient to send me reeling backward, stumbling toward the cashier's counter I had just passed inside.

"Yeah," responded this worthy, a grin spreading beneath the hairs of his neatly groomed mustache, "neither did we."

Bruce Lee Webb of the Webb Gallery in Waxahachie has organized "As Above So Below: The Art of the Secret Society," a gathering of the art and craft associated with the Freemasons and the Odd Fellows and a few other such clandestine fraternal orders, and he is presenting it in Domy's dedicated gallery. But here's the thing: This is not just a dozen or so framed examples of ancient documents or phantasmagorical paintings (which would have been impressive enough, certainly); this is a show of diverse and symbolic artifice as proffered by a one-man Smithsonian Institution.

There are a few ancient documents to be found, framed and unframed, among these arcane treasures, yes. But there are also, in the floor-to-ceiling display that covers three entire walls, large, silk banners hand-painted with various sigils and figures; strange wire-mesh masks for use in arcane scenarios; hand-carved wooden rods and swords and other such faux weaponry; a hooded robe embroidered with skulls and crossbones; towering columns and fluted pillars embellished with patterns suggestive of alchemical potency; and, in the center of the gallery, amid those pillars, a large device incorporating a sort of fabricated steed upon which learned officiants must have, during some unspeakable ceremony, ridden. Many of these sacred-to-someone items hail from the late 1800s or the early 1900s, yet most are in near pristine condition.

To sum our review bluntly: Webb isn't just fucking around with this shit; this is a serious and impressive collection. Domy Books has, for a while now, been a major local venue for important yet accessible exhibitions of human culture; this may well be its apotheosis.

As Above So Below: The Art of the Secret Society, Domy Books, Freemasons, Odd Fellows, Bruce Lee Webb, Webb Gallery