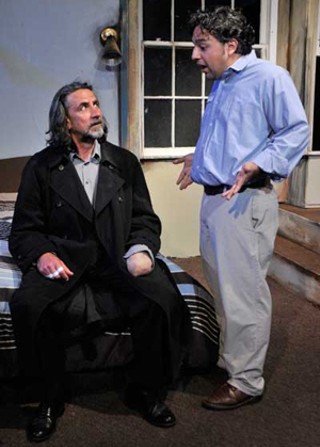 No one and nothing are what they appear to be in this latest production of a Martin McDonagh play at Hyde Park Theatre, although the title is a dead giveaway: The story's inciting incident involves someone getting his hand cut off in Spokane, Wash.;

someone named Carmichael, to be exact. Carmichael tells a perversely fascinating tale about hillbillies and a train, about watching his own hand wave him goodbye, and about searching for it ever since. He thinks that Toby and Marilyn have it, and he traps them in a hotel room to wheedle the hand off of them.

In my 25 years of watching Austin theatre, I've seen some great sets, and Paul Davis' set for this production is among them. This hotel room is so seedy that it's entirely earthy. It's also really old, with a convenient radiator for shackles and exposed pipes running up the walls, banked by dust trails so ancient that they've turned black. The realistic detail that Davis provides is extensive, right down to the paintings that seem to be the same color as the walls and the ragged carpet draped over the edges of the stage. And yet at the same time, it's gorgeous to look at, even painterly – a seedy, decaying, urban work of art.

As a group, the actors deliver McDonagh's dark materials with vocal clarity and a quick, controlled tempo. They hold so well for laughs, which arrive often and plentifully, that nary a line goes unheard. You'd think that Carmichael, with his insane 37-year quest for his hand, might seem a bit crazy, but Artistic Director Ken Webster, who also directs, plays the role with stoicism and patience. Looking like he's been living on the road with his long hair and beard, he makes you feel as if he's tolerated this scenario many times before. You also might think that being faced with a one-handed man with a gun and a candle burning in a gasoline can would panic practically any receptionist, but Mical Trejo's Mervyn seems to find the whole scenario exciting. Entertaining, even. Michelle Keffer's tagalong Marilyn serves as an effective argumentative foil for Aaron D. Alexander's Toby, the man with the alleged hand, and Alexander delivers a near-perfect performance, by turns desperate, demented, angered, repentant, remorseful, and empathetic; whatever the moment calls for, Alexander provides it and does so with technical precision and utter believability.

When you go to Hyde Park Theatre, you expect to see a solid script. Webster has made his theatre's reputation with small-cast, small-set plays, and this production, with its fully realized design and tight ensemble cast, is an excellent example of why he's been so successful. But while plenty of the credit for the production's success must go to Webster, the real star of the show is McDonagh's script. Art is a reflection of the culture from which it springs, and the people you find in McDonagh's black comic world are people proud of their racism and their homophobia; people with so little to lose that they'll lie, cheat, steal, and, if necessary, kill to get even the slightest crumb of the pie; people who don't know how to listen because they're very busy trying to get heard. And while you'll find yourself laughing, gasping, even, all the way through, in the end you'll sigh, shrug your shoulders, and think, "How the hell did we end up here?"