For their debut, the Exchange Artists have created an engaging fairy tale of a show 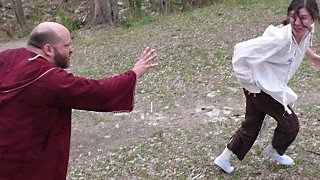 The Story Seekers is a play about Michael Jackson.

Okay, that's not what it says in the press release from new theatre company the Exchange Artists about its original site-

specific work staged on the grounds of the Elisabet Ney Museum. A princess named Bet (Kelli Bland) and her friend Gil (Frederic Winkler), a gardener's son, witness the overthrow of Bet's father at the hands of a very grumpy General (Mindy Rast). At the moment when the General's soldiers are about to execute poor Bet, a strange man freezes the scene. He is the Story Teller (Travis Bedard), and he whisks Bet away to dubious safety in a strange land where stories rule, and little children like Bet become the Story Teller's puppets in convoluted mash-ups of fairy tales from around the world. It seems the Story Teller never had a true childhood of his own.

It doesn't take Bet long to realize that the Story Teller is not the gentle savior he might have appeared to be. Together, she and her friends fight to free themselves, and in the other world – on the other side of a very conveniently placed stream – Gil never loses hope that she will return someday.

The Exchange Artists have created a fairy tale of a show, one that uses the location in delightful ways, weaving across bridges, through the trees, and across the grass. Of course, this is Texas, and at one stop in the narrative, a well-meaning arts critic decided to sit on the grass and, in the darkness, placed her hand squarely on top of a hill bristling with fire ants. But really, that turned out to be a mark in the company's favor; ushers escort and guide the audience, and on that evening, they were on hand immediately with assistance. (Thanks for the Cortaid, y'all.) Fortunately, the Exchange Artists remember that a producer should account for the audience's comfort and safety as well as ticket sales.

At just over an hour and a half, the show itself runs at a reasonable length for the subject matter. It's an experiment of imagination, and it's something that young audiences especially will enjoy. The staging adapts smartly to every location, and the actors' physical work is strong. As evening encroaches and the light fades, the production struggles to keep focus, especially when competing with wandering neighborhood cats, pickup basketball games, fire ants, and other distractions. A little more stillness among the ensemble might strengthen the play. As a first production, however, the Exchange Artists have shown themselves thoughtful and courageous. It will be interesting to see where their story leads next.