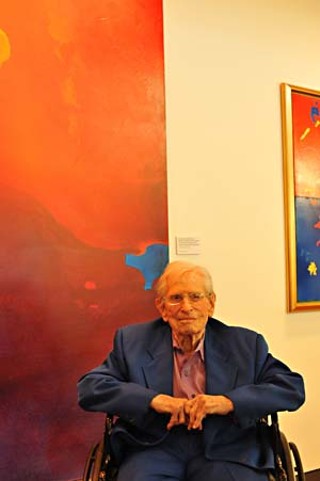 One of Austin's greatest artistic explorers has gone on to explore the undiscovered country. Kelly Fearing, who helped bring modernism to Texas in the 1940s and stayed on the vanguard of visual art in the state for almost seven decades, died at his home on March 13. The cause was congestive heart failure. He was 92. Little did the Arkansas native know that his move to Fort Worth in 1943 to work a job as a graphic artist for a firm building bombers would lead to his becoming such an influential figure in Lone Star art. But Fearing fell in with a group of artists – among them, Veronica Helfensteller, Bill Bomar, Blanche McVeigh, and Dickson Reeder – who sought to move beyond longhorns and bluebonnets, beyond regionalism altogether, and this Fort Worth Circle, as it was named years later, was responsible for some of the state's first homegrown abstract and surrealist art. That pioneering work eventually led to Fearing being hired to teach in the still-fledgling Department of Art & Art History at the University of Texas at Austin, where he joined a host of artists who were transforming the art scene in the state: painters Everett Spruce, William Lester, Ralph White, and Seymour Fogel; printmaker Constance Forsyth; and sculptor Charles Umlauf. Fearing stayed on the faculty for 40 years, during which time he co-wrote textbooks on art education and was "that teacher" for many students who went on to substantive careers as visual artists. And all the while, Fearing remained the restless explorer, experimenting with figuration, abstraction, color, and artistic processes in media ranging from graphite, charcoal, silver point, and paint to montage, collage, and found objects. His artwork also served as a vehicle for exploring spirituality; his images of animals, saints, stones, and seas – Fearing was particularly drawn to water – and even his fields of color and abstracted shapes spoke to his ongoing search for the mystical. Not for nothing was the 2002 retrospective of his work at Flatbed World Headquarters titled "The Mystical World of Kelly Fearing." Through the years, Fearing racked up many honors that speak to his standing in the art world – the E. William Doty Award from the UT College of Fine Arts, the Lifetime Achievement Award from the Center for the Advancement & Study of Early Texas Art, induction into the Austin Arts Hall of Fame, selection as the 2009 Texas Biennial Tribute Artist, and even a book of poems inspired by his work, Boy Returning Water to the Sea: Koans for Kelly Fearing – but arguably the greatest measure of his influence is that when the Austin Visual Arts Association instituted its own awards for outstanding artistry in the community, it named the award after him. A memorial celebration of Fearing's life and art will be held Saturday, April 23, 5-7pm, at the Austin Museum of Art – Laguna Gloria, 3809 W. 35th. 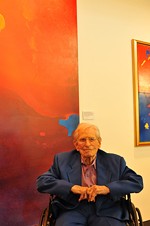 Kelly Fearing
A mystic in the 21st century