The Hand Inside the Puppet Head

Connor Hopkins and his friends are pleased to meat you 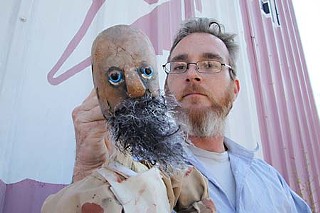 But how, then, to experience a darkly compelling live show based on The Jungle, Upton Sinclair's 1906 novel about the conditions suffered by immigrant laborers in Chicago's meatpacking industry? How to reckon the relentless, numbing pace of the assembly-line abattoir, the human disfigurements and deaths merely less frequent than those of the bovine subjects they're paid shit wages to slaughter and hack to pieces?

Trouble Puppet Theater Company has your answer, and it's partly funded by a grant from the Jim Henson Foundation.

Connor Hopkins started Trouble Puppet in 2004, presenting his papier-mâché creations in a classic puppet booth, performing at bars and nonprofit benefits. From the beginning, though, this wasn't your typical kiddie schtick; there was nothing other than adult about it. Hopkins and his troupe brought Austin audiences the politically charged, violence-spiked stories of The Gunpowder Plot, or How I Became a Catholic Suicide Bomber; The Cruel Circus; and The Case of the Haymarket Riot. In 2008, they adapted Mary Shelley's Frankenstein for a production at City Theatre and, later, Salvage Vanguard Theater. And in 2009 they premiered their version of The Jungle. It – a workshop production, mind you – was one of the biggest critical and popular triumphs in town that year. And this year – this month – Trouble Puppet is presenting the Henson-assisted full production of Sinclair's still-relevant nightmare.

We sat down for coffee with Hopkins to ask a few questions about his work.

Austin Chronicle: Why do you do such dark material? Aren't puppets supposed to be ... fun? Light? Family-friendly?

Connor Hopkins: Some people would imagine so. The funny thing to me is that I got started in puppets by helping out someone I'd just met. I just, as a way of getting to meet people, volunteered to help out. And that show was about a family-run strip club, with a whole lot of, like, father-murder, except he survives and comes back as a transgendered stripper and works in a club. It was dark and twisted and completely fucked up. So the next one we did was one that I wrote, and it was a musical about the Donner Party. And it's been like that ever since: My entire experience of puppetry has been on the dark side.

We've also made our shows funny in the past. But The Jungle is a departure, because it's the first time I decided, "Okay, I can make a show that's somber in tone, and I don't have to work in jokes," you know? When we did the show about the Haymarket Riots, it was hilarious, people laughed the whole time. And at the end, when all the men were executed, people cried. So we managed to hit both ends of the spectrum with that one. But I kind of got addicted to that formula, so it was hard when I got to The Jungle to let it just be grim and not try to lighten it up and not work in bits of slapstick.

AC: People seemed impressed that such a powerful thing was being done with, what, puppets?

CH: One of the reasons I chose The Jungle is because it's well-suited to the form. Because, to go way back to what puppets are good for, where they come from ... they come out of ritual and sacred traditions, where people would make vessels for gods and ancestors to possess. The spirits would be housed in these vessels and able to speak and so on – all of which was trickery on the part of the priests or the shaman, yeah, although a lot of them believed that that's what they were doing: channeling deities. Puppets have an innate ability to embody things – ideas – things that are bigger than human. And, ironically, you can make those ideas real by putting them into these things that are less than human – but still maintain that power.

The Jungle fits puppetry as a medium because it's a story about people who are at the mercy of forces beyond their understanding. It's also our first show where the puppeteers are visible, instead of dressed in black with hoods over their faces: They're dressed as workers in the slaughterhouse, just doing their job, and the puppetry is part of that job. Because you want to see these workers acted upon; you want to see that the world they're in is so much bigger than they are and has more parts to it. It enables the audience to instantly extrapolate from this little puppet to this human being to this group of human beings. It sets that up from the beginning, when you see workers walking around with puppets, pulling a puppet out of a metal bucket, making it perform a scene, and then tossing it aside like it was a piece of meat.

AC: Which I've been wondering – if, uh, are you a vegetarian?

AC: Did that have anything to do with why you chose The Jungle?

CH: Everyone I know has assumed that that's why. But, to me, the story is more about the workers – and immigrant workers in particular. Which is what Sinclair said when he wrote about reactions to the novel, that he was aiming for the country's heart and ended up hitting them in the stomach. Because that's what everybody reacted to, the stuff about food. Typical Americans: You tell a story about the plight of immigrant workers, and everybody gets up in arms about "What? You mean I've been eating cow anus?" Because, yes, you have been, you've been doing that for centuries, but that's not the point.

AC: How did you choose the cast for this show?

CH: We're actually getting to do a show where everybody who's in it has been in at least two other Trouble Puppet shows before – which is pretty exciting for me. Because, ordinarily, we start out with a couple of weeks of puppetry boot camp, getting people familiar with the basics, to where they can handle the puppets well enough so they don't have to think about it constantly. It's like learning a piece of music: You have to learn how to play the puppet well enough so you can forget about it, because you can't concentrate on the character and everything if you're thinking about: "Ah, I have to remember to keep the proper amount of tension between the head and the feet; I have to remember to put gravity in his butt when he sits down," and all that kind of stuff. That has to be second nature.

AC: And they're comfortable doing such dark stuff?

CH: They are, but it's a kind of funny thing. In rehearsal, we'll do these scenes where something really ghastly is happening. And when it's put together well and it's working and you can see the moment really taking shape and taking weight ... of course that makes the director, that makes me very happy. So I'll laugh; I'll get kind of giddy. And they all tease me about it. Like, "Yeah, that old man just coughed up a lung – that's hilarious."

But that's another thing about puppetry: You can take on something that's pretty horrific – and, frankly, if you were doing this play with just humans, it'd seem very preachy – but because we're using puppets, we have a little more room to go into the dark places. Like you can take a puppet whose character is, ah, being raped by the boss, and hook her to the crane that hoists the cow carcasses out, and lift her up by her foot, and just leave her dangling in the air while her puppeteer is dragged off into the dark by the guy who plays the boss. So you pretty effectively show that she's been turned into a piece of meat, without having to do the literal things. But you can also show, literally, how these workers are treated like machines, like meat.

It's a jump back and forth over the line of literalism – and it can be done so easily, so gracefully with puppets. It's one of the things that makes puppetry unique.

AC: There's a concept in robotics, the Uncanny Valley, that Trouble Puppet doesn't get anywhere near at first because the puppets are just these roughly human-shaped chunks of papier-mâché. But then the puppeteers start manipulating them, and it's, it's almost unnerving, at times. How do you learn to imbue these things with such humanity?

CH: Well, for one thing, the puppets have their own personalities, and you figure out what that is by using it – because the puppet wants to move in certain ways; it's better at certain things than it is at other things. Maybe it's extremely limber, or maybe it's got bad knees. So a lot of it is inherent in the object, like in Object Theatre. You look at the puppet and you ask: "What is it? What does it do? What do we want to see it do?" If something's a teapot, you want to see it pour tea, you want to see steam come out of it. And from there, you go into, "Well, what can we get it to do that we wouldn't expect it to do?"

Your job as a puppeteer is to figure out what a puppet needs to do, how it needs to move, to evoke a certain emotion or idea. I don't have any real theatre background at all. I don't know what it's like to direct actors or to be directed as an actor, so I'm just kind of making it up as I go. Like, I'll tell the puppeteers, "Okay, he needs to look sad," and they just make the puppet look sad. You couldn't explain it any more than they can. And then there's others, where you say, "Make the puppet look sad," and they say, "How?" And you say: "Okay, he's going to turn his head to the left, not all the way, like three quarters to the left. Then he's gonna take a breath and he's gonna look down." And they do that, and they're watching the puppet they're manipulating, and they're like, "Oh my god, he looks so sad!"

That's what I find so fascinating about puppets: The union of spirit and basic mechanics that you need to make them work. 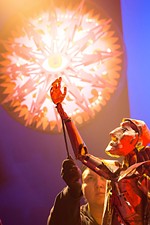 Ethos' Atlantis: A Puppet Opera
This new musical take on the fall of Atlantis pulls us into an ancient place, powered by myth and ritual

Summer Stock Austin's Carnival
The production offers impressive spectacle, but the musical's treatment of women is still a problem 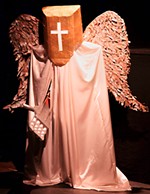 Wars of Heaven: Smackdown!
This Trouble Puppet Theater production takes the philosophic battle between good and evil into the pro-wrestling ring 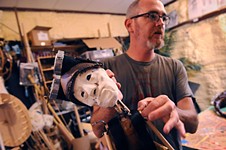 Who the Hell is TVHeadATX?
The local wheatpasting provocateur reveals … a thing or two