Improvisers on a wild, cathartic chase for the truth 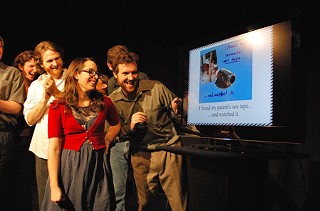 Cast members discover the Austin secret that they've just been acting out.

It's no secret that Austinites have been spilling their guts onstage of late. Indeed, so many people know about it that Austin Secrets has become the most wildly popular improv show ever mounted at the Hideout Theatre, and its current run has sold out every performance. The show taps into current trends toward memoir and personal confession seen in PostSecret, Mortified, BedPost Confessions, et al., by having improvisers devise scenes based on secrets submitted by Austinites. Austin Secrets' popularity has been so phenomenal that the Hideout extended its run with shows at 6:30pm on Saturdays and a special engagement Thursday, March 24, at the Long Center's Rollins Theatre.

Roy Janik, who developed the concept and chooses the secrets used in the show, finds the appeal of these hidden personal stories in their "ring of truth": "Improv can be an amazingly powerful tool for unlocking the truth in our otherwise sheltered brains, so it's only fitting that we add improv's voice to this chorus."

And therein lies the secret of Austin Secrets' success, Janik adds: "We're constantly chasing the truth of the secrets we use. When the show is really clicking, the energy in the theatre is incredible, and the space is transformed. It becomes a wild, cathartic ride through emotions that the audience is just as much a part of as the performers. The room can be deadly silent and tense one moment as we explore the darker side of human nature, then suddenly the players and the audience are howling with laughter as that tension is released. There's no other show I've been involved with that breaks down the barriers like that."

Janik has also never seen a show that affects the performers the way Austin Secrets does. "Because the source material is all real, the performers are really putting their whole selves out there, to try and match and respect the pain that's in some of the secrets," he says. "I'm often shocked at how the more serious secrets affect the improvisers. I can see their faces get flush, their bodies go still, and their eyes fill with tears. Even after the scene is over, I'll see them walk to the sidelines to be greeted by a hug from their fellow cast members. That never happens."

Cast members describe how much they relate to the people whose secrets they're entrusted with – Jordan T. Maxwell describes "a kind of instant empathy" being generated – and how that has pushed them to go deeper into themselves and make more personal connections than they have in other improv shows. "Sometimes the secret is like one that I know, and in playing it I feel I can do it justice, as well as push through those buried emotions I often hide," says cast member Kaci Beeler. "I knew I would be sympathetic with many of the secrets; I didn't know that they would teach me about the hidden things within myself."

They've also been surprised by the audience's willingness to dive so deeply into these stories. "The audience response to the mixture of comic and dramatic improvisation has been nothing less than mind-blowing," says improviser Andy Crouch. "Feeling an audience hold their breath and come along with you into a quiet, painful place is this thrilling, delicate thing that we're just beginning to cultivate."

Secrets may still be submitted to the show online at www.hideouttheatre.com/shows/austinsecrets or on a postcard dropped off at the Hideout box office or mailed to: Austin Secrets, the Hideout Theatre, 617 Congress #201, Austin, TX 78701.

Austin Secrets will be performed Thursday, March 24, 8pm, in the Rollins Theatre of the Long Center, 708 W. Riverside, and Saturday, March 26, 6:30pm, at the Hideout Theatre, 617 Congress. For more information, call 443-3688 or visit www.hideouttheatre.com.