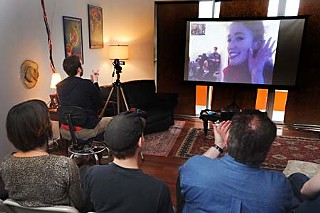 You Wouldn't Know Her, She Lives in London/You Wouldn't Know Him, He Lives in Texas is an interactive, multimedia, site-specific theatrical experience that is way more casual and intimate than its premise might sound. The play exists in three different locales at the same time: a loft across from the Longbranch Inn, the Roundhouse in London, and online, for anyone with bandwidth across the world to watch and participate in the story (via live streaming at www.roundhouse.org.uk/live).

The Austin side of the show focuses on Ryan Peterson, a math teacher played by the eminently affable Judd Farris, who invites the audience of 20 into his home on the premise that they're the Austinite friends he's been neglecting for his lover across the pond, and he wants them to finally meet her. Elizabeth, a feminist librarian played by the bright-eyed and bushy-tailed Rachel Watkinson, is doing the same with an equally small group in London.

From an Austin perspective, the theatrical experience is a combination of being in the room with Farris as well as seeing his video interactions broadcast on a projected screen with Watkinson in London. The audience members are encouraged to meet one another and mingle and tweet live during the performance (with the comments also projected in real time on the screen).

Making interaction a central part of a show can be a risky proposition. In Austin, at least, the atmosphere is loosened up enough by Farris' antics to make for fairly rowdy contributors. Both actors react to the tweets they see (which, at the first performance, were coming in from across the continent) as well as to each other. But for all the fascinating aspects of interactivity and technology, You Wouldn't Know Her/Him, like any play, only works as much as it's engaging to watch. Both Farris and Watkinson come across as adorable lovebirds head-over-heels for each other, improvising against each other and the incoming tweets. The show exists in that vein for the right amount of time before narrative, theatrical elements turn the experience on its head.

You Wouldn't Know Her/Him is charming, sweet, and unique. It exists as both an observable production and an interactive experience from across the globe. Being able to use a smartphone to contribute a witty comment that the audience and the actors react to is a powerful, liberating feeling. When a production ends, usually it only exists in the audience's minds. Perhaps some photos are online to rekindle the memories. With You Wouldn't Know Her/Him, it's possible afterward to sift through the simulcast of tweets to see the immediate reactions, jokes, interactions, and narratives online. That residue of the play and the production still exists beyond one person and what they remember, and it can be called upon.

The best aspects of social media aren't in the ability to instantly read the rants of Charlie Sheen but rather in the chance to share, react, and create together. The play exists not only between Ryan and Elizabeth but between both audiences and continents, shaped by the questions and comments in person and online. You Wouldn't Know Her/Him brings something totally different to the theatrical experience yet focuses on what's simple, sweet, and inherent in all of us.