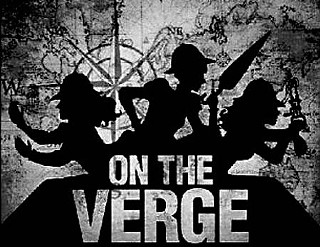 Eric Overmyer's On the Verge is a unique gem of a play. Filled with linguistic backflips, it spans the personal growth of three women explorers – or sojourners, to use the play's patois – from the late 19th century. Mary, Fanny, and Alexandra have each taken daring trips across glaciers, over mountains, and through the jungle. Previously, they sallied forth with dozens of native guides to support their quests, and as such they battled wild animals and the dangers of the untamed natural world for the sake of discovery.

This time, they have decided to go sojourning together, just the three of them – no guides to carry their loads for them, only the unlikely companionship of other women as they go looking for the secrets of a new territory somewhere in the Pacific, known only as Terra Incognita.

The exuberance of these three ladies dominates their every adventure. Along the way, they debate cheerfully the notion of whether trousers are appropriate gear for a lady sojourner and find themselves taken aback as new words and foreign ideas from the future begin to burst forth from their own mouths. Not threatened by the unknown, these three women decide the only thing for it is to keep going deeper into unexplored lands.

One of the great appeals of On the Verge is the challenge it poses to designers, and with this production, Mary Moody Northen Theatre has opened up much of the design work to St. Edward's University students rather than its usual team of pros. From eggbeaters to mountainsides to abominable snowmen, the play is filled with a quirky series of props and costumes, and the student designers seem to have had as much fun as the characters dreaming up possibilities. I attended opening night, when a few snags here and there were apparent: a dress that almost fit or a prop that didn't quite get into place. Given the complexity of the play and keeping in mind that professionals at the top of their game experience the same thing (Broadway's Spider-Man, anyone?), I'd say the student design team has succeeded in creating a fun and whimsical world to support the play.

Under David Long's direction, the performances provide great fun. Jon Wayne Martin shows excellent comic timing in each of his several parts. As Mary, Lindsley Howard exemplifies the spirit of these curious and courageous ladies; though small in size, Howard portrays her character's burning desire to always move forward with a delightful force of presence. To not mention any one actor in particular would seem to damn them with faint praise, but all four actors pull off the performance with energy and aplomb.

The only significant disappointment with On the Verge is its lack of any true sense of conflict. Much of that results from a script that tells a journey of exploration without any significant antagonist; even the cannibals are worth having over for tea in this strange world. Like it or not, human narratives are defined by the struggle between opposing forces, and while much of the play's charm lies in its frivolity and optimism, the show finds itself with too much slack for the payoff to succeed. In a sense, the play's greatest strength is the potential that it suggests for what might happen next – a fitting note for a story of undaunted exploration.