"People don't do such things!"

So claims Judge Brack upon hearing that Hedda Gabler has placed a pistol to her temple and pulled the trigger. When talk turns to Hedda, we so often begin with her end. Her suicide – and at this late stage, I hardly think it warrants a spoiler alert – is her defining act as a character. But though it comes at the end of the play bearing her name, after we have spent a couple of hours in her company and been witness to much willful, malicious, and self-destructive behavior on her part, there's still something about that dreadfully final act of Hedda's that retains an element of mystery. Was it driven by despair, from the sense that, now locked into a respectable marriage and soon to bear a child, she would never escape what she saw as the suffocating confinement of conventional domesticity? Or was it driven by defiance, representing the ultimate "Fuck you!" to a staid, hidebound society in which Hedda felt she had never belonged? Or having publicly praised the reported suicide of her onetime lover as an act of profound courage – "the one right thing" – only to learn that Lovborg's death was actually an accident, did she feel her hand forced, that to live up to the principles she espoused, she had no choice but to kill herself? We may each have our theories, but 120 years after Henrik Ibsen's provocative drama premiered, we are no closer to a definitive answer about that act than about any of the other rash, cruel actions of Hedda's in the course of the play. This harsh figure remains, as Charles Isherwood wrote in The New York Times, "strangely inscrutable, her essence as elusive as the murky depths of our own tangled psyches."

That, of course, hasn't stopped generations of theatre artists from seeking out Hedda's secrets, trying to tease out why she does all those things people don't do, and striving to pin down, as to a corkboard, this deadly wasp always flying just out of reach. Hedda may baffle us, infuriate us, even repulse us, but she also compels our attention in that curious way that even the most repellent of literary or dramatic characters can. And as evidence of our enduring fascination with General Gabler's little girl, a pair of productions by local theatre companies have hit our stages simultaneously: Palindrome Theatre's Hedda Gabler, freshly adapted from the Ibsen original by Artistic Director Nigel O'Hearn, and Salvage Vanguard Theater's Heddatron, the 2006 comedy by Elizabeth Meriwether in which a Michigan housewife and mom is spirited off to an Ecuadoran rainforest by a band of robots that wants her to perform the original Hedda Gabler with them. Though the scripts are miles apart in tone and approach to Ibsen's drama, both strive to bring us a little closer to the playwright's troubled and troubling heroine by considering her from a 21st century perspective.

Meriwether's play does so the most overtly, offering us a contemporary stand-in for Hedda, in circumstance if not temperament. Ypsilanti homemaker Jane shows no signs of being an entitled, contemptuous ice queen – early on in the play she often simply sits in silence, alone – but like Hedda, she's in a very conventional marriage to something of a sap and has a baby on the way. Her isolation and muteness speak volumes for Jane, effectively mirroring the restrictive social conditions that Hedda found so smothering. It's only when the robots arrive on the scene, imploring Jane to "turn around, bright eyes" – which, yes, segues into an unexpected and fiercely hilarious cast rendition of "Total Eclipse of the Heart" – that the character shakes off her life of quiet desperation and makes her discontent heard. With the song, Amy Downing's Jane bounds from seething speechlessness to roaring rage, and she sustains her fury as Jane assumes the role of Hedda for the robots. She dominates them, not just because they are patchwork tin men seemingly constructed from scraps of her prisonlike home (indeed, they emerge from a broad back wall crammed with whitewashed domestic debris, the clever creation of designer Lisa Laratta), but because the only human quality they appear to have had programmed into them is timidity; they are literal embodiments of the automatons surrounding Hedda in Ibsen's play, mechanically and meekly following the dictates of social custom. (That said, these robotic creations, developed with the University of Texas chapter of the Institute of Electrical and Electronics Engineers Robotics and Automation Society, are awfully charming and, as voiced by various members of the cast, quite funny, too.) As a creature of bone and blood and will, then, Jane's Hedda stands in sharp contrast to the figures of polite society, giving us an inventively vivid new way of seeing how much of an outsider Hedda felt herself to be in that world.

Meriwether also gives Jane something of a doppelgänger in the person of Henrik Ibsen, whom we see suffering in his own household hell: berated by an overbearing wife, frustrated by a saucy maid whose consciousness he has been desperately (and unsuccessfully) trying to raise, and agitated by playwright rival August Strindberg, who has invaded his home. Robert Pierson's Ibsen, muttonchops exploding wildly from his cheeks, is almost more sigh than man, so beaten-down does he appear. He only lights up when he clambers under the kitchen table (which doubles as a doll's house – wink, wink) and makes up plays. Like Jane, he finds an outlet in theatre, but it's at best a temporary escape from his constrained existence. You won't find him walking out on his wife and slamming the door or even cheating on that harridan of a helpmeet (a fact helpfully supplied in the book-report narration delivered by Jane's 10-year-old daughter Nugget, portrayed here by young Ava Johns with precocious appeal). Alas, neither Ibsen nor Jane have the fortitude to defy the society that has caged them. However much they might identify with the general's daughter, they aren't Hedda. They are the people who don't do such things – which may be Meriwether pointing out how we today are so desperately willing to submit and conform.

Not so Ms. Gabler. The Palindrome production reaffirms just how unwilling – or unable – Hedda is to yield to societal norms. Almost from the instant she comes into view, Robin Grace Thompson's Hedda is bristling with impatience and irritation: at finding her new husband's aunt in their home at such an early hour and at Aunt Julia's affectionate embrace, at the sunlight flooding the drawing room and the bouquets on every surface, at the faithful family maid, at the suggestion that she "filled out" while on their honeymoon – in short, at anything that smacks of the social niceties or domestic comforts of a settled, bourgeois life. Left to herself for a moment, she gasps for breath as if she's drowning in this sea of tranquility.

Indeed, here Hedda is starved for a kind of oxygen: for the recklessly impetuous acts on which she thrives. Acting in the moment without thought of the consequences, even if – perhaps especially if – it risks harm to herself or others, seems an innate part of her character, as vital as breathing. Thus, when her old schoolmate Thea Elvsted appears on her doorstep, followed soon after by Hedda's old flame Eilert Lovborg, who is now both Thea's lover and an academic rival of Hedda's husband, George, Hedda heedlessly lashes out at them like someone desperately clawing her way to the surface from the bed of the ocean. Thompson eloquently expresses this in her performance, creating a sense of Hedda always operating on impulse, every statement or move made on a whim or by reflex; the character seems not just unwilling to consider the effects of her actions but unable to see them, as if a curtain in the present blocks the future from her view. Thompson offers many shadings to her Hedda – we glimpse the character's petulance, despair, doubt, cruelty, wrath, and more all in due turn – but the impulsiveness that fuels those feelings may be the quality that most defines her characterization and lingers in the memory.

Thompson's Hedda feels like a part of our world, as much our contemporary as Jane. Yes, Ben Taylor Ridgway's paint-accented costumes suggest the late 19th century, but in his adaptation O'Hearn has taken pains to avoid the stiff, formal language that might distance us from the characters, and director Kate Eminger has guided her actors toward a similarly unstuffy approach. So, like Thompson's Hedda, Jacqueline Harper, with her chilly disdain for her new mistress; Aaron Alexander's George, who's truly married to his studies; Rachel Meissner's gently compassionate Aunt Julia; Rommel Sulit's subtly sly Judge Brack; Chase Crossno's elegantly passive Thea; and Nathan Osburn's restless Lovborg seem familiar. The result is a world within the play that may be less rigid than the one Ibsen described, but it's also not as far away from us. It's easier to recognize as our own. Certainly, Palindrome nudges us to acknowledge it that way by having the audience enter the playing space at the Blue Theatre through the doorway to the veranda of the Tesman home. We are, that suggests, part of all this.

So where does all this leave us with regard to the puzzle that is Hedda? To me, the link between Palindrome's Hedda and SVT's Heddatron is a loss of control, a sense within the characters that their lives are no longer their own. Someone – the husband that rescues you from the robots in the rainforest, the wife who makes you wear a union suit with the word "freak" written on it, the judge who shattered your last illusion and wants to blackmail you, society – has taken the decisions out of your hands. So what's left to do? Do you just give in and go along or find some other way to assert yourself? With these shows, in this moment, it feels like Hedda is choosing the latter. And in a society that increasingly leaves many of us feeling alienated and powerless, that choice rings out like a warning shot. 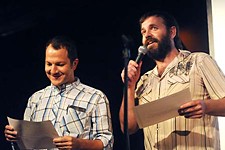