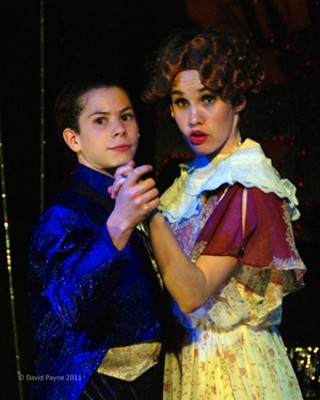 Chicago may not be a show that exactly leaps to mind when one thinks of musicals for young performers in their teens. John Kander and Fred Ebb's 1975 satire has a dark and cynical soul,

one befitting not only the Prohibition-flouting Jazz Age in which it is set but also the post-Watergate age in which it was created. Its vision of loveless marriages, corrupt courts and prisons, human life as a commodity (and a cheap one at that), and a celebrity-addicted public ever in search of a new fix and easily manipulated by the hucksters who give it to them has the bitter taste of adult disillusionment about it. Oh yeah, and speaking of "adult," there's that not-inconsequential sexual content of the play, too.

But hey, in the three and a half decades since Chicago premiered, teens have only gotten savvier when it comes to material like this, and you don't have to look far in Austin to see young performers tackling musicals this adult or more so: McCallum Fine Arts Academy doing The Who's Tommy, Austin High's Red Dragon Players mounting Urinetown: The Musical, Summer Stock Austin staging Sweet Charity and Assassins. And kidsActing, the longtime arts training school that's behind this production of Chicago, has certainly been down this road before, with Rent and Les Misérables being two recent examples. Best not to assume in this day and age that the kids can't handle it.

And to see David Bologna strut out here as shameless, unscrupulous, wheeling-and-dealing legal eagle Billy Flynn is to see how spectacularly well they can handle it. Bologna, whose turn in the Broadway production of Billy Elliot the Musical earned him a Tony Award nomination, owns the stage. While he's a good head shorter than almost everyone around him, he commands attention, his Flynn radiating an unassailable confidence unencumbered by sentiment or morality; he and doubt don't even share the same area code. This shyster knows all the angles and lays out his courtroom schemes with the brisk efficiency of one who doesn't suffer fools gladly. Still, his cool connivance is not without charm, especially in the cocky flair with which he walks, that bantam swagger. Bologna is so at ease and fluid in his movements he recalls a young Donald O'Connor. Watching him is a total joy.

Now, not everyone in this kidsActing cast has the depth of talent or experience that Bologna has. To be honest, the performances range from the very polished to those that are still finding a level of comfort onstage. But directors Dede Clark and Kirk German have managed to form a unified band from these disparate players. Every one of their young charges appears to get the play, and their commitment to getting what it's about across to an audience is as tightly bound together as their voices under the spirited (and fine) musical direction of Noel Alford. It's heartening to see so many young people – the cast exceeds 30 – giving so much of themselves and all toward the same end.

That said, the unity of the company does suffer somewhat when it comes to the choreography, in which the unevenness of the performers' skill levels leaves the big dance numbers with some rough edges. But that didn't seem to matter to the packed house at the show I saw. The enthusiasm of the crowd's response bespoke a deep pride in the young performers' efforts, flawed or not – the pride of parents, siblings, and friends whose love of the work is inevitably intertwined with their love of the person making it. This is community theatre in the truest sense: a performance by members of a community for members of that same community, a gift given to and received by people with clear ties to one another. It infuses a show with an intimacy that is its own reward. That good feeling wouldn't fly in Kander & Ebb's jaded Windy City, but it's just right for this company that takes us there.