The man who brought together more voices in Austin than anyone else has sung his last song. Morris Beachy, who founded nine choral ensembles here over a 40-year span, died in his sleep Sunday, Feb. 6, from complications due to Alzheimer's disease. He was 82. A gifted singer himself – his baritone enriched many a recital, concert, and opera over the years – Beachy arrived in Austin in 1957 after having earned the first doctorate in voice from the University of Southern California. From the moment he hit the University of Texas campus, he began building the choral program in the Department of Music (now the Butler School of Music) into one of the country's largest. We can thank him for the Longhorn Singers, A Cappella Choir, University Chorus, and UT Chamber Singers, which he once took on a 90-concert tour across the Middle East and Europe. But Beachy didn't confine himself to the Forty Acres. Off campus, he founded the Austin Choral Union (1964-1998), Austin Choral Artists (1998-2002), and the Morris Beachy Singers, which toured the U.S. and Europe; he prepared major choral works with the Austin Symphony Orchestra from 1958 through 1994; and he served as chorus master for Austin Lyric Opera in its first six seasons.

A perfectionist on the podium, Beachy would spend hours working and reworking a small section of music until he was satisfied with the sound. But that rigor, toughness, and drive endeared him to many singers. Morton H. Meyerson was one; he considered singing under Beachy one of his greatest experiences at UT, and he repaid his mentor years later by establishing the Marlene and Morton Meyerson Centennial Professorship in Music. Beachy held that post until his retirement from UT in 1993. Ten years later, while still actively making music in the community, Beachy was inducted into the second class of the Austin Arts Hall of Fame.

Beachy is survived by Frances Beachy, his wife of 60 years; daughters Sylvia Beachy and Diana Rutledge; and grandson Spencer Rutledge. A memorial service at the Butler School of Music is planned for spring. Memorial gifts may be sent to: University of Texas at Austin, Butler School of Music: Dr. Morris J. Beachy Choral Fellowship, 1 University Station E3100, Austin, TX 78712-0435. 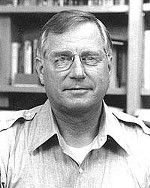