A celebration of Indian classical dance that was unfailingly interesting 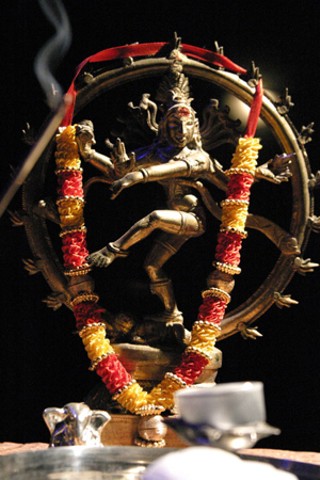 When depicting the ocean stirred by gods and demons, Anuradha Naimpally's arms radiated outward and rippled as if sourced from the ocean currents themselves, churning deep

within her strong upper back. The ripples traveled the lengths of her arms through the fingertips, where they seemed to continue on into the air as energy, surrounding Naimpally like an aura. Seriously!

The piece was "Soma: The Moon," one of 12 dances that made up Parampara Part II, a celebration of the classical dance form of southern India, Bharata Natyam. Set to traditional music, sung poems, and rhythmic syllables, most dances told stories about the gods Krishna and Shiva and the everyday people who relate with them. Other dances told about other cultural legends, like the young warrior queen Laksmibai of Jhansi, who learned to fight and died in battle for her country.

Naimpally staged Parampara Part II to commemorate the 20th anniversary of her organization and dance school, Austin Dance India, and to bring Austin's Bharata Natyam dance community (yes, there is one!) together onstage. For Part II, Naimpally danced alongside her luminous teenage daughter, Purna Bajekal; Annelize Machado; and Austin Arts Hall of Famer Gina Lalli. Some know Lalli better as the sidewalk psychic from Slacker, but after the Feb. 5 performance, Naimpally credited Lalli with introducing classical Indian dance to Austin decades ago.

The production, as a whole, was wonderfully rich and textured. The traditional costuming was precise and opulent, and the modest set-pieces by Sandhya Aluru formed an unobtrusive frame for the dance. The dancing itself was unfailingly interesting. It has a multidimensional quality, especially as danced by Naimpally. Even when she faced the audience, there was an awareness of her body's angles that pointed in the other directions, exuding power in those directions. Somehow, I could imagine holding the dance in my hand, as if it were a figurine or prism, and feeling its dimensions and weight. But I don't want to compare Naimpally to an inanimate figurine or idol – certainly, her dancing is all live.

In Naimpally's presence onstage, we see more than just the presence of one dancer. The tradition, the centuries of dancers who performed variations of these dances, reside in her, for the moment. She has a stage presence to die for – she's beautiful, for starters, and the quality of her dancing is often powerful and light at the same time. She has no problem filling up the stage with herself. Her face is bright, and her expressions are subtle and refined yet natural. I could watch her do the tiny, coy eye shifts and head movements of this form for hours. Also mesmerizing were the gestures that traced a vertical line in front of the body – the ever-so-slight swaying of an upstretched arm, and the fingers bloomed open to form a lotus flower. While making these gestures and keeping the upper back strong, the dancer might squat in a grand plié or stamp the feet in quick rhythmic patterns or spring up in the air, catlike, moving from side to side.

Bajekal, Naimpally's daughter, exuded a youthful joy paired with strength, beauty, and technique that paralleled her mother's, while Machado's style was more reserved. Lalli, now in her 70s, can no longer compete for youthful joy, but she performed the gestures with subtlety and grace.