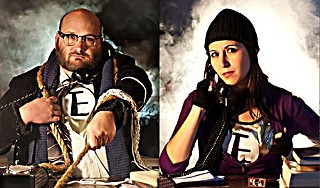 For a reviewer, superlatives are like fine spices: One can only afford to use so many. In this case, however, I must: Capital T Theatre's Spirits To Enforce by Mickle Maher is the best play I've seen at FronteraFest in the five years I've attended. Hilarious, layered, well-executed – the show leaves you feeling fuller than when you walked in.

Twelve superheroes have decided to mount a production of Shakespeare's The Tempest. For that, they need to raise money, so the entire play takes place in a phone bank aboard a submarine as the 12 heroes recount the tale of their attempts to produce a play to their prospective (and quite stingy) donors. All the while, their nemesis, Professor Cannibal (Cannibal? Caliban? Hmm!) grows ever stronger on land as they make their phone calls. Wacky? Sure. The play resembles the set: Phone cords litter the stage in a huge, tangled mess. However, it all leads somewhere eventually.

January and February are packed months for the arts in Austin, but Spirits To Enforce is worth the effort to attend. Gary Jaffe's direction of the highly complex script is strong, the ensemble carries the show, and the sound (Brett Hamann) and set design (Mark Pickell, also Capital T's artistic director) are appropriately minimalist. Together, it is most excellent.