It's that time of the biennial season when the hottest show in town gets underway at the Texas Capitol. You know the one: It starts out slowly, gradually gains momentum with some hugely farcical turns, then crashes headlong into spring with a dramatic, blood-splattered finish. This year, though, a happy set of circumstances has brought to Austin a fitting tonic for the Legislature's distressing habit of kicking school kids and old people to the curb when money is tight.

Enter stage left (way left): Molly Ivins, the late political columnist and longtime Lege observer whose words could move tens of thousands of readers to laughter in the darkest of times. Now, days before the fourth anniversary of Ivins' death on Jan. 31 and just when Austin most needs her, beloveds, she's back – resurrected on the Zach Theatre Kleberg Stage courtesy of the Texas premiere of Red Hot Patriot: The Kick-Ass Wit of Molly Ivins. The play was written by twin sisters Margaret and Allison Engel, both accomplished journalists who were such ardent admirers of Ivins that her death, eight years after she was diagnosed with breast cancer, inspired them to become first-time playwrights. They saw the stage as a place where Ivins' voice could be kept alive, and last March, their dramatic tribute opened in Philadelphia with Kathleen Turner as the feisty Texas writer (see "Red Hot Patriot: The Kick-Ass Wit of Molly Ivins," March 12, 2010).

Lou Dubose, who co-authored three books with Ivins, including Bushwhacked: Life in George W. Bush's America, and is a former editor of The Texas Observer, the little alternative monthly that Ivins co-edited with friend Kaye Northcott during the Seventies, remembers being a little dubious when he first learned that a pair of journalists were working on a play about Ivins. "Why not a playwright?" he recalls thinking. "Is Sam Shepard available?" But seeing the Philadelphia production changed his mind. "I was emotionally overwhelmed," he said. "It was a fair, honest, and really skillful treatment of the character."

The premiere production sparked interest in Red Hot Patriot from theatre companies across the country, but Austin seemed the most obvious place for the play to land after Philly. After all, here was an audience intimately acquainted with Ivins, a South Austin resident who was very much a familiar face around town. Turner was initially slated to perform Red Hot Patriot in Austin under the direction of David Esbjornson, who staged the premiere and whose revival of Alfred Uhry's Driving Miss Daisy, with Vanessa Redgrave and James Earl Jones, is one of the hottest tickets on Broadway right now. But scheduling problems with a play that Turner is taking to Broadway in April got in the way, so Esbjornson and the Engel sisters – Allison is communications director for the University of Southern California, and Margaret runs the Alicia Patterson Foundation in Washington, D.C. – began scouting around for another actor to play Ivins.

Zach Artistic Director Dave Steakley was certain that he had the actor to fill Ivins' boots: Barbara Chisholm, a towering figure in her own right, having appeared in almost 50 productions around Austin over the past 25 years with a larger-than-life persona. (Chisholm is also married to Chronicle Arts Editor Robert Faires and has in the past written for our Food and listings sections.) "Almost the instant I began reading Red Hot Patriot, I could clearly see Barbara taking over this role," Steakley explained in an e-mail. "If you want a ballsy actress who is quick-witted and savors the deliciousness of a well-crafted play on words, then Barbara is your gal."

But, as Chisholm herself put it recently, "They didn't know who I was – and why would they?" Almost everything she's ever done on stage has been far from the marquees of the Great White Way. After a videotape audition, though, Esbjornson and the Engels learned – and gladly signed on with a hometown star. "Austin is a big deal," Esbjornson said. "I'm really excited it's Barbara [playing Ivins]. I'm excited it's somebody who's local and who has a connection to the city and to Molly."

"That just seemed so right to us," said Margaret Engel. "And also seems so right and necessary to do here."

Watching Chisholm in rehearsal, embodying Ivins as she struggles to write a column about her father in her old office at the Observer, a vintage typewriter and a battered wooden armadillo occupying the desk, it's easy to understand why Steakley lobbied so hard for her to secure the role in Austin. As Steakley tells it, "When the casting news began to get out, most everyone said: 'Well, of course. Who else?'"

Chisholm herself is a political junkie, born into a long line of New Deal Democrats. At the same time, she understands the heated political debates that led to the rift between Ivins and her conservative father: Chisholm's own mother has made a fairly recent switch to the Republican Party, a move that pains Chisholm to even talk about. "Some of the worst arguments I've ever had with her were during the 2004 elections," she said of the swiftboating of John Kerry's military career during his campaign against President George Bush, or "Shrub," as Ivins dubbed him.

"Like Molly," Steakley continued, "Barbara is not going to sit on the sidelines ... she enters fully into the fray of discourse, especially when there is an injustice to be righted. The flame of Molly's spirit feels like a red-hot firecracker in Barbara's hands."

Like so many others in Austin, Chisholm was an avid reader of Ivins' columns and books. "So many of us feel like we know her because she was so open and she could establish through writing that sense of camaraderie. More precisely," she added, "Molly gave the impression she was open and accessible, but I don't believe she really was; I think she was really quite private."

The aim of the production is not to create an impersonation of Ivins, Esbjornson told the Chronicle late last year. Of course, it would be almost effortless for someone to stand on stage and read from Ivins' work. The play, the director went on, is "based on a lot of fact, but ultimately it's a fiction, theatrically, meant to enlighten the audience as to what might have motivated her to become who she was." To craft a play like Patriot, he said, "You do have to realize you're doing a piece of theatre and you're not doing a documentary, and so you want to make sure that the audience is drawn in emotionally."

The role of Ivins marks Chisholm's second opportunity to play a local hero; in 2005, she played Lady Bird Johnson in Keepin' It Weird, a theatrical mosaic of Austin created from the actual words and stories of local residents. "It was a tremendous and poignant honor, which is very much what I feel about [playing Ivins]," she said, crediting the Lady Bird experience with helping her develop the role of Ivins. "Obviously they're very, very different, but what's really important about playing an iconic woman like Lady Bird and like Molly, whose memory is very real and fresh to so many people, is not to mimic so precisely but to honor and understand [her] so that you provide a portal for the audience to project their own memories. The audience is coming with their own knowledge. What you need to do is give them a forum to have that, without getting in the way."

Chisholm has brought her personal sense of Ivins into the rehearsal room, where Red Hot Patriot has continued to develop. In an interview with the Chronicle in December, Esbjorn­son noted: "When you're doing a play like this, it's always moving. There is no final draft." For the Austin production, for instance, Margaret Engel added, "We were able to put in a reference to Ralph Yarborough" – a Sixties-era folk hero of Texas progressives – "because I know the audiences here will get that." The Austin audience, Margaret Engel said, is "already grounded in the politics and people she was writing about."

The play features many of the same characters that Ivins wrote about – Ann Richards, Bob Bullock, Shrub – though so far there's been no mention of Gov. Goodhair, Ivins' nickname for our longest-serving governor, Rick Perry, who is flirting with the idea of a presidential run in 2012. Here's a perfect spot to invoke Ivins' spirit when she warned the country against voting for George W. Bush: "Next time I tell you someone from Texas should not be president of the United States, please pay attention." 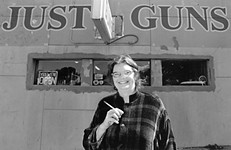