Tweet
print
write a letter
1) 'THE RED BALLOON' (TONGUE AND GROOVE THEATRE) A boy. A red balloon. A moving cartoon background into and out of which characters come and go. The most charming live cartoon fantasy imaginable. Directed by David Yeakle.

2) 'I WITNESS' (TUTTO THEATRE COMPANY) The waking dream of life in words and dance, and one of the most intensely emotional experiences I've had in a theatre. Choreographed by Amanda Oakley, Shawn Nasralla, and Jennifer Micallef.

3) 'THE DROWSY CHAPERONE' (ZACH THEATRE) Martin Burke, Meredith McCall, Jamie Goodwin, Jill Blackwood, and a cast of thousands – not really, but sometimes it seemed like it. Tremendous musical fun. Directed by Nick Demos. 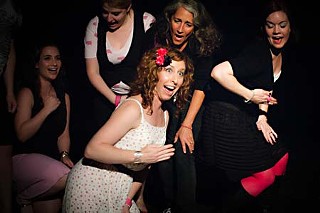 4) 'BOYS OF SUMMER' (GIRLS GIRLS GIRLS) Five women and a guest. Improvised musical comedy. Really. Music, lyrics, plot – everything improvised on the spot, and laugh 'til you cry funny.