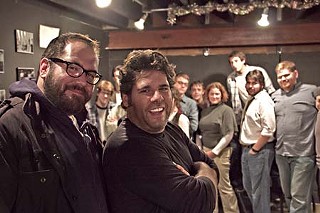 As if ColdTowne Theater weren't already known for serving up sensational improv and sketch comedy, now it wants to do the same with theatre? Well, for one night, at least. This Friday, ColdTowne is ringing out the old year with something new: a pair of comedic plays. Dead Uncle Ted features three estranged brothers brought back together to clear out the belongings of their deceased uncle, swapping tales of doomed romance and karaoke stardom in the process, and Loose Fish has three wildly inept cops trying to stop the murderous rampage of the Sudoku Killer during a raging snowstorm. The plays are the creations of Los Angeles trio Dasariski (maybe you caught them at the Out of Bounds Comedy Festival in 2006 or 2009?) and usually performed just by the three of them, but here they'll be performed by some two dozen of Austin's top improvisers: members of ColdTowne, the Frank Mills, Get Up, Midnight Society, and other superb troupes.

For the source of the idea, flash back to last New Year's Eve when Dasariski member and improv guru Rich Talarico came to Austin to help ColdTowne premiere its sketch revue, Eye for an iPhone, and to lead a workshop in which the participants assembled a sketch revue in 24 hours. "I think Rich was blown away by the talent that Austin had," recalls Dave Buckman of the Frank Mills, who's known Talarico since 1997, when both were doing Chicago improv. "The guys from Midnight Society and Bryan 'Lubu' Roberts were on fire that night, and I think Rich wanted to find a way to work with them and us again." Fast-forward to August, when Buckman and Rachel Madorsky, his partner in improv and in life, had flown to upstate New York to work on an improvised short film that Talarico was shooting. "While we were up there," says Buckman, "we started talking about him coming back for New Year's again and how we could top a Second City alumnus understudying a ColdTowne show. Having Austin improvisers understudy Dasariski seemed like a really fun idea."

"So far, these plays have only been done by Dasariski," says ColdTowne co-founder and Executive Director Michael Jastroch. "They've never had their work put on by other people, and they thought it sounded like a fun idea. We've never produced a full-length play before, so we're looking at it as a challenge, a way of flexing some new muscles, and maybe an opportunity for some things down the road."

ColdTowne is approaching the shows like traditional theatre productions, with actors learning all their lines, rehearsals, and direction. Talarico will provide the finishing directorial touches when he arrives from L.A. the week before the show, but laying the groundwork will be Buckman, who couldn't be more thrilled. "I love love directing plays," he says. "I used to direct a lot of plays in college and [did] a few in Chicago before I went to Amsterdam and then got on the Second City track. And I haven't done one in Austin yet. Directing for the Second City Touring Company is 25 percent helping your cast write new original scenes. But the other 75 percent is combing through archived material and helping these up-and-coming actors perform Tina Fey and Steve Colbert scenes on the road. The challenge is getting the same laughs the original improvisers/writers did when [the scenes] were originally performed, while still finding your own voice within the character ... which is not as easy as it sounds because if you ever read a scene that was improvised – let's just say the joke isn't always on the page. That's a long ways to say, I am treating [Dead Uncle Ted and Loose Fish] like plays but utilizing the same tools I used at Second City. And I am sure Rich will spin what I've done his own way once he gets here, which as you know is the cornerstone of improv: yes and!"

Dead Uncle Ted is served at 8pm and Loose Fish at 10pm, with each theatrical entrée preceded by an appetizer of sketch comedy cooked up in the workshops taught by Talarico. The dessert to the feast will be a Sixties dance party at 11:30pm. If this sounds like your dish of New Year's delight, just don't go heading over to Airport Boulevard to partake. For this venture into theatre, ColdTowne is shifting from its comedy home to an honest-to-Thespis playhouse: Salvage Vanguard Theater.