With its Downtown museum site sold, whither goes AMOA? 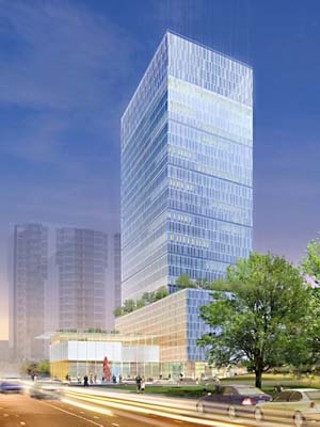 The one that got away: 2008 proposal for the block to be shared by AMOA and Hines' office tower

For close to 30 years, the Austin Museum of Art has clung to the dream of a permanent Downtown home on a block south of Republic Square Park, a dream it held on to even through the collapse of three separate building plans that were publicly announced. But the news last week that Travis County had contracted to buy the block AMOA owns between West Third and West Fourth and Guadalupe and San Antonio streets means that the museum has finally let go of that particular dream. So what does that mean for the museum's future? Is this the end of AMOA's pursuit of a new facility of its own?

Not at all, says AMOA board of trustees President Lynn Sherman. In fact, the sale of the land was instigated by the museum's desire to find a way to move forward on the project that last stalled out two years ago this month when Houston-based developer Hines Interests LP withdrew from a partnership with AMOA to buy the eastern half of the block for a 30-story office tower. According to Sherman, in January 2010, the board began exploring all available property in the central business district – which he defined as being between Martin Luther King Jr. Boulevard and Barton Springs Road and just west of MoPac to just east of I-35 – to look for raw land on which a new facility might be constructed or an existing building that might be repurposed into a museum. In late spring, the board also started to entertain new options on the block it owns: offers to purchase the lot, in part or in its entirety, or to co-develop the lot with AMOA as Hines was to do. "Everything was on the table," says Sherman. After study and discussion, "We decided that the best-case scenario was for us to sell the lot." Proposals were made by assorted developers and investment groups, as well as the county, and the board ultimately decided to go with the county. "What was appealing about the county," notes Sherman, "was that it was a cash sale." And with AMOA's bank account beefed up by $21.75 million, the museum would have an unprecedented resource for realizing its dream of a Downtown home. Notes Sherman, whose tenure on the board goes back to both the folding of the 2008 plan and the cancellation of the Richard Gluckman design in 2000 and who chaired the board after the tech bust, "We've never started one of these capital campaigns with $22 million in cash in the bank." The three previous efforts all came at the back end of booms and suffered as the economy went south. "This time, we've got no boom, and we've got the time to make a sound decision, and we've got a significant amount of money in the bank. We've just never been in that position before."

Sherman isn't ready to release any information regarding a way forward to a new museum with that $21.75 million, but he does allow that the board has identified some reasonable options within the central city. He's quick to add, however, that the board is in no rush to land a new site. Any process for determining a location for and construction of a new museum will be in line with the process leading to the sale of AMOA's land: "deliberate and thorough." "The first consideration for us is what location makes the most sense for the museum." (For more on the county's purchase of AMOA's land, see "The Sky's the Limit.")