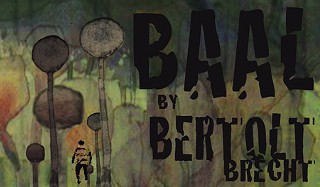 One of the problems with writing criticism is that many times, people want a critic to come out and say, "It was good" or "It was bad" about a show. But some shows, like Paper Chairs' production of Bertolt Brecht's Baal, won't let one do that. The best assessment I can provide for Baal (pronounced "bail") is that it is difficult.

To demonstrate, I'll pull from the English major's bag of tricks and use some reader-response theory, in which the meaning of a text is dependent on what the reader brings to it.

Person A is a graduate student in philosophy and is delighted to go to the theatre instead of working on her thesis for a night. She is fascinated by the story of a wastrel poet named Baal (Gabriel Luna) who spurns the support of the literary world and rejects all polite society, choosing instead to thrive on manipulation and filth, living only for himself. Obsessed with freedom amid the natural world, he deflowers a string of young women, quickly abandoning them to their fates, and later murders his only friend. That there continue to be people who insist on loving Baal seems perhaps a critique of the societal romance with the antihero. Also, the sexual politics are layered with complexities; is it anti-feminist to show the villain who mistreats these women ultimately punished?

Person B is a well-meaning guy who thought he'd show off his cultural know-how to a girl he met last week and take her to see Baal on a first date. After all, Paper Chairs has a great reputation for creating cool theatre. Right now he's thinking: "Damn. Bad choice."

Person C is an actor who has been in a show with some of the cast members of Baal before. He recognizes the excellent ensemble work. Each performer has committed to director Dustin Wills' vision, which incorporates some of Brecht's later stylistic ideas on presentation. It's tight work, and it relies on great character acting and physical technique to enliven the challenging material.

Right now, the actor is thinking: "These actors are working hard! Almost as hard as that time we were in a show together."

Person D is a freelance theatre critic who has come to see Baal after a long week and is still recovering from being sick. (Sorry about the cough; I swear I took a cough drop.) The critic sees that the design team (unlisted in the production program) has immense talent. In particular the costumes, made of visible period undergarments over which the actors pile on different clothing for each character, support the show's bawdy vision of an illusion-in-the-making. The lighting designer has used a lot of awesome tricks, although the critic is from the school of thought that literal darkness can be overused, and it would be nice if there had been, well, more light.

Moreover, Baal is one of Brecht's earliest plays, and it doesn't quite match his later style of narrative and political discourse. Baal is very much an antihero play of the German tradition, but at the same time it wants to turn on that tradition, and watching a play like Baal requires some real thought to take in the less-than-savory subject matter. The show's greatest scenes involve the entire cast performing Brecht's music, because at these times one is impressed again with the talent and commitment of every actor on stage.

The theatre critic thinks, "This play is difficult."