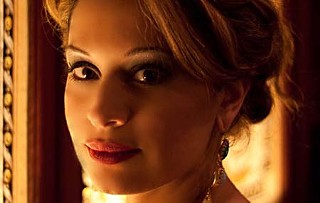 On a tour stop between appearances in Hawaii and Eastern Europe, Michelle Schumann swung through town this past weekend for the Austin Chamber Music Center's latest concert, Birthday Suit(e). For this celebration of four composers whose birth years tick backward from 2010 in tidy 50-year increments, Schumann invited Texas native and up-and-coming soprano Hanan Alattar to join her in tackling the most intimate of forms: the art song.

The two artists looked stunning as they took the stage, Alattar in multitextured black against Schumann's flowing gray gown. From their easy back-and-forth, it was clear the two were friends. Since meeting during their years at the University of Texas at Austin, both women have charted successful careers that take them around the world, a fine legacy of the Butler School of Music.

First up, marking Samuel Barber's 100th birthday, was the composer's Four Songs, which showcases his characteristic blend of melancholy and harmonic tension. Schumann and Alattar opened the evening beautifully with "Heaven-Haven (A Nun Takes the Veil)." Alattar's presence was gripping, making it easy to imagine her capturing the attention of an opera house's packed audience. Her vocal work, meanwhile, befitted the intimate setting of the First Unitarian Universalist sanctuary. Amidst perhaps a hundred guests, Alattar captured the delicacy of the art songs, matching Schumann's assured dynamics most successfully in the sumptuous "Sure on This Shining Night."

Hopping back 50 more years, the artists next performed Hugo Wolf's Goethe-Lieder, a collection of three Mignon songs. Never short on drama, Wolf's songs mimic his own turbulent lifelong struggle with depression. The material gave Alattar much to chew on, and the result was a florid, passionate performance.

Intermission was preceded by the night's sole living composer, Osvaldo Golijov. The youngest work was also unfortunately the concert's least memorable. Golijov's ethereal, nuanced style is among the most unique in composition today, but this piece, "Lúa Descolorida," especially sandwiched between his fellow composers, didn't go anywhere. Despite this, the performance was technically strong, including gorgeous cross-hand work by Schumann.

Following intermission, the audience was sent back a full 200 years to the birth of Robert Schumann with his Frauenliebe und -leben. A chronicle of the life and love of a woman through the filter of her adoration for her husband, the songs are the composer's admiring portrait of himself and are as unabashedly romantic as they are enjoyably arrogant. Robert Schumann's varieties of setting and mood, as well as the extensive virtuosity required of both singer and pianist, set up a tremendous second act. Alattar and Michelle Schumann were fantastic throughout. Highlights were the sweet "Seit ich ihn gesehen," the sprawling "Süsser Freund, du blickest mich verwundert an" (whose allusion to sex was the night's only obvious paean to the birthday suit), and the sad, spare "Nun hast du mir den ersten Schmerz getan," which closes the set with a solemn solo piano reprisal of the opening love ode.

The audience wanted more, so Alattar and Schumann came back out to perform "Quando me'n vo," Musetta's famous aria from Puccini's La Bohème. Alattar wowed, moving coyly through the audience, and to her credit, her performance was supersatisfying, even taken out of context. As an encore to this studied, delicate night of art songs, though, the aria was a strange distraction. I know, an encore is an encore, but the two could have easily brought back any of the Robert Schumann or Wolf pieces. Indeed, no distraction was necessary from this fine concert.