Edison had Menlo Park. Mack Sennett had Keystone Studios. And Chris Trew has, frankly, all the world. This week, the local comedian/improv impresario will be pulling a Fun Fun Fun Fest trifecta on the Yellow stage: appearing with his New Movement comedy group, performing as his rapper/MC/alter ego Terp2It, and hosting the Alamo Drafthouse Air Sex Contest (think air guitar minus the guitar plus sex minus a partner). But when the Chronicle caught up with Trew to discuss Terp2It's forthcoming CD, Half Man Half Beard, and his imminent live, onstage shave, Austin's 21st century Renaissance man-child was in Bellingham, Wash., and then Santa Fe, N.M., on his second national tour as the official host of the Air Sex World Championships.

Importing Air Sex to the U.S. – Austin got it first after Japan – was the brainchild of Alamo head honcho Tim League, but Trew is the face of Air Sex and unequivocal in his support of pretend fucking. "While I'm very thankful for the Japanese and their inventing of Air Sex, I'm extremely confident that we can more than hold our own as a nation," says the basketball junkie and professional wrestling semiotics blogger/podcaster. "The talent in North America is creative and hungry. America needs Air Sex. It's a release, it's high-brow entertainment, and it's the most important sporting event in the world."

Trew's contributions to Austin's improv and comedy scenes since moving here in 2005 are substantial. With the New Movement, he and fellow New Movementeer Tami Nelson have carved out a home for comedy on the Eastside and a unique approach to teaching improv in a scene teeming with classes. Trew, a nationally renowned improv teacher, explains: "Our classes are always focused on the beginning of everything: the first glance, first words, and so on. We slow it down in the beginning and let the pieces fall in place from there. We've found it to be the most effective way for our improv shows to come off as sketch comedy shows."

On his website, in a May 12 missive titled "Not Nerdcore," Trew earnestly explains why Terp2It no longer self-identifies with the nerdcore hip-hop genre. He also explains that Terp2It is not "a comedy rapper, because the songs are meant to be amusing but not necessarily humorous." He has since coined the term "performance artcore" to describe his off-kilter and sometimes Andy Kaufman-esque boundary-blurring. "I definitely feel like I'm getting better at writing and rapping!" Trew enthuses. "These days Terp2It is rapping about his Puff [pubic hair: 'It's like my bling,' he clarifies], stray cats [actual felines, not the band], and being hungry while dancing." In an inspired series of YouTube videos showcasing his unblinking deadpan and arrested development, Trew wages a campaign/bloodless coup against a very real old high school classmate, the "elected, quote unquote, president of our senior class of '99. I served as his vice president, and he's been slacking in his duties since the day we graduated. I dive into that subject on the new album," Trew imparts.

Admittedly, shaving off half of your 2-year-old whiskers is a fantastic publicity stunt for a CD-release festival show. Yet Trew waxes philosophical: "Most men have a buddy relationship with their beard. My beard and I are more like twins. I know what it's thinking. It knows what I want for lunch. We both know that if you truly love something, you must set it free."

Trew also opens for Sean Patton Monday, Nov. 8, 9:30pm, at the New Movement Theater, 1819 Rosewood. He hosts an Air Sex Championship Tuesday, Nov. 9, 7pm, at the Alamo Drafthouse at the Ritz, 320 E. Sixth. And on Wednesday, Nov. 10, at the New Movement Theater, he tells stories as part of The Megaphone Show at 9:30pm. For more information, call 788-2669 or visit www.newmovementtheater.com. 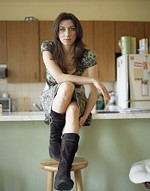 Hell Yes Fest
Saying not just 'yes' to comedy but ...