Meyers and the "Royal Spanish" (Courtesy of Anthony Parmelee)

As if Anne Akiko Meyers' life wasn't already full of adjustments in the past few months – giving birth in June, touring with a newborn in September, releasing a new CD, Seasons ... dreams ..., on Sept. 28 – she also fell neck over strings for a new violin and had to have it. By "new," I really mean very, very old: 313 years old. But it was made by the master of masters in such matters, Antonio Stradivari, just before what's known as his "golden period," so take that into account when imagining its appeal for the distinguished concert musician.

In an interview with New York City classical station WXQR, Meyers insists that she wasn't in the market for a new violin – in fact, she's had a Strad of her own for four years now, the 1730 "Royal Spanish," and considers it "a dear friend" – but the instant she picked up and played the 1697 "Molitor" (named for a general in the army of Napoleon, who reportedly owned it before Molitor), Meyers was "floored" by its "incredible power" and "its evenness over the registers." About three weeks later, the instrument went up for sale in an online auction by Tarisio, a seller of fine instruments, and after some fierce bidding, Meyers won it with an offer of $3.6 million – the largest amount ever paid for a musical instrument at auction. The record purchase has earned Meyers quite a bit of international publicity over the last three weeks, including a very nice segment on the Oct. 26 edition of Countdown With Keith Olbermann. She tells the MSNBC host that after buying the Molitor, she "couldn't wait to get her mitts on it" and then gives him a sample of its power with a version of George Gershwin's "Summertime" that leaves the normally voluble host just about speechless. (See for yourself: www.msnbc.msn.com/id/3036677/#39859995.)

The only downside for Meyers is that she'll be selling her beloved Royal Spanish to help pay for the Molitor. Noting that she's toured the world and recorded three CDs with her first Stradivarius, Meyers anticipates that parting with it will bring "a sad day." But since her first time playing the Molitor in concert was, she says, "an incredible, mind-blowing experience" that took her "to new places with the exploration of the sound quality and its tone," the loss of her old violin will be more than balanced by the thrill of her new one. Austinites will have a chance to hear it live in the pristine acoustics of Dell Hall when Meyers guest solos with Peter Bay and the Austin Symphony Orchestra Feb. 18 & 19, 2011. After she plays Prokofiev's first violin concerto on the Molitor, there may not be a roof left on the place. For more information, visit www.anneakikomeyers.com. 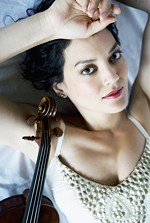