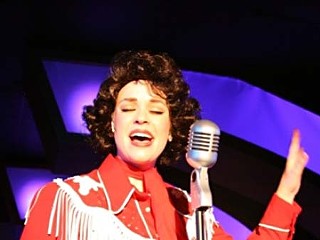 In a culture seemingly dominated by celebrity and shamelessness, the thought that a famous artist might also be a genuine human being is comforting. In the case of Patsy Cline, that image in fact held some truth.

Based on a true story, Always ... Patsy Cline by Ted Swindley is a revue of Cline's music and also a story of one night in the life of the young country singer, when she befriended someone ordinary and showed how ordinary she herself was in turn.

Louise (Edie Elkjer) is a divorcée with small children. She loves Patsy Cline's music enough to call into the local radio station in Houston every morning to request one of Cline's songs. When Cline (Selena Rosanbalm) arrives to perform in Houston, Louise is there in the front row, and through a little luck and a little audacity, she meets the singer face-to-face. To her astonishment, Cline sits right down with her, and Louise discovers, through the course of the evening's performance, that it isn't just the music that's lovely. It's also the singer.

This production is a revival of the same show TexARTS produced two years ago, directed by Todd Dellinger and Robin Lewis. I didn't see the original, but the show seems to be mostly unchanged. A few things stand out.

First, Rosanbalm deserved every ounce of recognition she received for her performance. (She was nominated in the category of Acting in a Leading Role by the Austin Critics Table.) She has a beautiful, excellent voice, and rather than mimic Patsy Cline, she makes the songs into a tribute by grabbing what's at the heart of them and owning the music. Rosanbalm also lets the frustrations of Cline's life peek through her charm and warmth without letting them dominate. This isn't a play that people go to because they want a tale of loneliness and despair; they go because they love the music. Rosanbalm gives her portrayal of Cline texture without losing sight of the loveliness that drew people to the singer.

Second, TexARTS should post guards wherever they keep their wardrobe (designed by Katie Uhler). I want that green dress. Want. It.

(The other costumes were nice, too – lots of early Sixties evening wear, a great visual to back up the music.)

Third, TexARTS has one of the nicest front-of-house operations I've encountered in a while, which went quite a ways toward assuaging my frustrations after I fought traffic for an hour to make the 7:30pm curtain. Obviously, heavy traffic is not the fault of the company. However, as most Chronicle readers will be making the trek to Lakeway from Austin, they should leave themselves plenty of time to get there and consider going on a weekend. Those who go should find Always ... Patsy Cline to be a nice show with superb music. And a killer green dress.