Arthouse creates a space where artists can invent, experiment, make the future 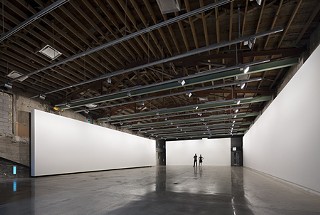 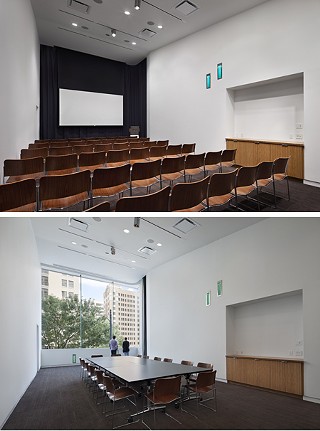 You aren't likely to mistake the new Arthouse for an old dress shop anymore. The headquarters of the statewide visual arts organization, which reopens this weekend after a yearlong $6.6 million makeover, no longer bears any resemblance to the Lerner Shops outlet that anchored the northwest corner of Seventh & Congress for most of the last half of the 20th century. 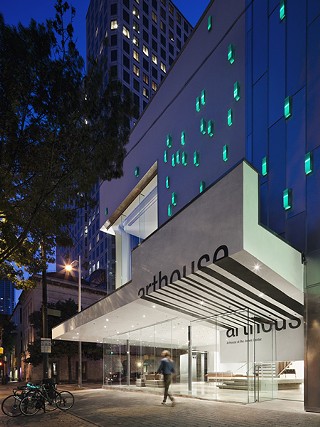 Indeed, you aren't likely to mistake the renovated space for anything else on the Avenue or in the rest of Downtown, for that matter. I mean, what other buildings thereabouts are pierced with more than 175 glass bricks in irregular patterns or boast signage with letters stretched like taffy from exterior awning to interior lobby (a visual joke apparent only from certain angles) or have the elongated bottom step of a wooden staircase extend into a surface of the reception desk? The art center's new architectural elements are so distinctive, so progressive, so dramatically different from those of the surrounding buildings, that it almost looks like Arthouse's revamped home was beamed here from the future. Certainly, the building makes a statement that's forward-looking, anticipating new directions in design and construction. 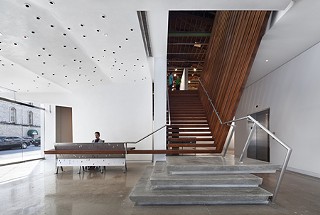 Watch your step (become part of the desk). Arthouse's new lobby and stairway to the second floor gallery (Photo courtesy of Michael Moran)

And what could be more fitting for an organization with a mission to showcase art on the vanguard? Paul Lewis, Marc Tsurumaki, and David Lewis – the inventive New York architects responsible for the center's makeover – have managed to create a new look for this Arthouse home that is not only stylish, sophisticated, and original but also expressive of what Arthouse is all about. From top to bottom, outside and in, this space engages the eye in fresh ways, with alterations of familiar forms into new ones, unexpected juxtapositions of shapes and materials, reconfigurations of space that open up new relationships to our surroundings; it's designed to provoke new thoughts, new experiences, just as the contemporary art exhibited inside the building does. It even sets the tone for our experience of that art, leading us to those transformational artistic experiments through its pervasive architectural ingenuity. This Arthouse draws us into the future. 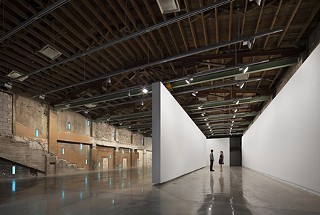 Mobile wall: the second-floor gallery's sliding panel positioned in the middle of the space (Photo courtesy of Michael Moran)

That said, Arthouse has never been one to abandon the past. Again and again, it has sponsored projects and exhibitions with an eye toward history, whether it's the low tech miniature re-creation of ancient Rome in The 24 Hour Roman Reconstruction Project; the zines, fliers, and records of Austin's early punk scene in "Matt Stokes: these are the days"; or the guided architectural exploration of Arthouse's building in "Florian Slotawa: One After the Other." That last show, which focused visitors' attention on the painted masonry that survived from the days when 700 Congress was J.J. Hegman's Queen Theater and the large second-story window added during its department store incarnation, seems to inform part of the makeover, since those elements figure prominently in the redesign. What the building was has been deliberately and purposefully integrated into what the building is and will be.

And that "will be" may be where Lewis.Tsurumaki.Lewis' work is at its most inspired. The team has anticipated the variety of needs within the venue, particularly in regard to the kind of art shown, and accommodated them with admirable flexibility. The room that contains that large second-story window can be configured for meetings, lectures, or screenings, and it's equipped so projected images may also be seen outside from the street. Likewise, the new 5,500-square-foot rooftop deck can host receptions, live performances, or film showings (on a 17-foot-by-33-foot screen). Even the passenger elevator is set up for showing video art. And running the length of the main gallery on the second floor is a panel 13 feet high and 70 feet long that's suspended on steel tracks so it can be moved across the gallery, subdividing the space in whatever ways the exhibiting artist desires. (For the first exhibition in that space, Jason Middlebrook's "More Art About Buildings and Food," the wall has been positioned toward the north side of the building and covered with a huge drawing that includes 177 family recipes submitted by the public.) This center can and may well look different every time you enter it. The architects have made room for that; they have imbued the space with possibility.

That's key for an organization committed to keeping pace with artists, who habitually race ahead of the rest of us, discovering new ways of seeing and new forms of expression. What those kinds of creative souls so often need are spaces where they can explore the unknown, attempt the untried, risk the new. Now Arthouse is finally able to say to them, "Here is that space. Come invent, test, make the future." The organization's redesigned building is a striking achievement, and it's the home Arthouse has long deserved.