Jaston Williams' tales from his life are heartwarming and surprisingly poetic 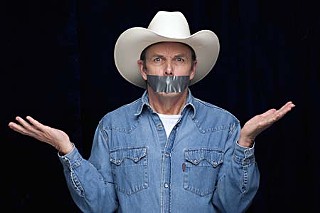 What we want from memory is a story: the story of how we came to be who we are. We want it to have sweet action scenes and a sexy romantic lead and a rousing ending in which everyone who should win does. Ultimately, we want the stories of our lives to make us feel comfortable with who we are and who we were, knowing we've grown along the way.

So we look for the patterns to put that narrative together for ourselves. Only – as I've found out and I hope you have, too – life is not so linear as we might like it to be. There is no arc; there's only life. And yet, knowing our proclivity for a story, how do we make sense of ourselves?

Enter Jaston Williams, of Greater Tuna fame, who looks along the spectrum of his life from childhood to fatherhood in his one-man show Cowboy Noises. Rather than concentrating on the overall arc, however, Cowboy Noises is delivered in episodic tales concentrating on the minutiae of different parts of Williams' life: teasing an Asian-American girl in small-town West Texas, hearing the Beatles on The Ed Sullivan Show, being confronted with old cars and history in Buenos Aires, meeting his adopted son for the first time in China.

You have to be a captivating presence to pull off a one-man show, and Williams is surely that, his West Texan accent infinitely more authentic than any Austinite's used pair of cowboy boots purchased at a thrift store. While the show is predominantly Williams recounting his tales, Noises does include a healthy dose of visitations from the eccentric citizens of his colorful background. If you know Tuna, you know Williams is a master at creating engaging characters.

These colorful excursions are always welcome, but what makes Cowboy Noises most rewarding is the more personal tone Williams imbues the show with compared to some of the zanier Tuna fare. He digs at the foibles of those around him and mainly at himself. He analyzes the difficulty his father must have felt losing him to the Beatles and modernity and the difficulty he had meeting his son from across the globe.

I should mention that I was at least 20 years younger than anyone else in the audience, and certainly the specificity of Bonanza jokes were well over my head, but Cowboy Noises reaches past its Texan specificity to how we make sense of the continuum of our lives in a very sweet way. Williams does a great job of laughing both at and with his subject matter concurrently. Really this suggests that the only way for him to cast the first stone is at himself, which he does with aplomb in this heartwarming production.