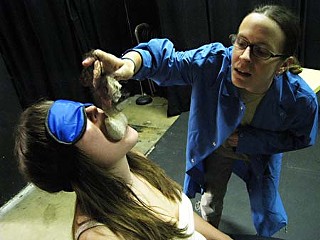 "Can we shoot the audience? Can we light them on fire? Can we kiss them tenderly and lay them down on beds of grass?" – Josh Meyer

Here's my question: Do you want to be in that guy's audience?

I think I kind of do. But that tricky choice is always at the core of Rubber Repertory's work, especially its new show – Play? Piece? Let's say experience. – Biography of Physical Sensation, which opens Oct. 14 at Salvage Vanguard Theater with very limited seating. (They also offer a friendly way around that choice; read on).

The title tells all. Rubber Rep co-Artistic Directors Matt Hislope and Josh Meyer have abstracted just the physical sensations from the life of a woman named Jamie Damon. In Biography, they attempt to re-create those sensations for an audience – just 40 people who will sit "in-the-round, support-group style," at each performance, according to Meyer.

So there's no narrative and no plot, just what Meyer describes as "a mash-up" of Damon's life, "a fever dream of memories and little bits of memories, with everything but the sensory elements removed."

Biography fits into the startling, bright-red history of Rubber Rep, a company that has caused enough fuss to earn three Chronicle covers since Hislope and Meyer began producing shows here in 2002. They've done several of the creeps-under-your-skin-and-lights-a-match plays of Wallace Shawn, including the allegedly unproduceable and pornographic A Thought in Three Parts, never produced in this country until Rubber Rep did so in 2007, 30 years after it was written. Shawn himself called the production "unbelievably beautiful."

Most recently, Rubber Rep won a 2007 Rockefeller MAP Fund grant (intended to encourage "extravagantly creative impulses" – like these guys need encouragement) to produce The Casket of Passing Fancy, a piece in which each audience member chose his or her own experience – one each, to be experienced alone and never offered to anyone else again. Who wants to go on a Hansel and Gretel adventure? Who wants to have a song sung on his or her body? Who wants to help an alcoholic mother change her baby's diaper? According to Meyer, Biography "uses some of the same ideas as Casket to greatly different effect."

Rubber Rep turned its search for a personal biography for this play into part of this year's Fusebox Festival, that week in April when edge-teetering performance art from around the world converges in Austin. In a piece called Your Secrets Aren't Safe With Us, the company conducted three days of interviews, asking participants to bring "your oldest article of clothing, a sample from a journal or diary entry, and something that smells like you (will not be returned)."

Eventually, Hislope and Meyer chose Damon. "We wanted someone fascinating and willing," writes Meyer, "but a surprising number of people ended up meeting those criteria. Jamie is deeply in touch with her senses and was the only person who said, 'Look, I have a storage unit full of journals, letters, photos, and personal memoirs, and I can have it all on your doorstep tomorrow.'"

While Meyer explored Damon's archival cache, Hislope conducted two months of in-depth interviews, which "at times resembled a sort of psychotherapy," according to Damon. "Putting myself back in the moment to recall details of purely physical responses was an experience all its own."

That process generated a list of about a thousand sensations that Rubber Rep turned into upward of 70 "miniature performances" that layer "multiple sensations on top of one another. In the show, it's not uncommon for four or five things to be happening at one time," Meyer explains.

The woman whose life was the basis for it all knows nothing about "what they're doing with what they know of my life. It will be interesting to experience the physical sensations of my experiences through another paradigm in a big chair."

Big chair? That's the cool thing – that's the friendly way around that tricky choice. As with Casket, it's up to you. "Our three sizes of chairs offer three levels of sensation," Meyer explains. "The smallest chair is perfect for people who want to be a bit more passive and take it all in, while the tallest chair is for those who want to jump off a cliff with us," who want "both the most pleasurable and the most painful sensations."

Warning, big chair enthusiasts: "The only thing we promise is that you won't leave with any permanent damage."

I was thinking of going for the small chair. But Meyer says that this is a show about "taking what life gives you," something all of us (and by that I mean me) could learn to do with greater grace. Maybe I will choose the middle chair. Maybe that one will be just right.

Who wants to go on a Goldilocks adventure? Which Biography of Physical Sensation chair is right for you?