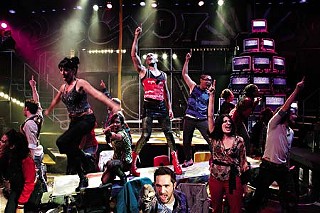 If you've never experienced a Dave Steakley musical, you should experience this one. Few things can match watching a production in which every element comes together to produce a coherent whole. Steakley, Zach's longtime producing artistic director, has both the means and the wherewithal to do exactly that every time he helms a show, and he does it with this hugely popular Jonathan Larson musical inspired by Puccini's opera La Bohème, but instead of a group of starving artists in Paris in the 19th century, we're watching a group of young bohemians in New York City at the turn of the millennium.

If Michael Raiford has designed a finer set than the Eastside Village he sketches out on the Kleberg Stage, I have not seen it. He's torn down the walls around the theatre, exposing the storage kept behind them, and built a massive set of graffiti-laced metal levels. With the orchestra easily seen, low at the back of the set, the atmosphere is partylike, a huge nightclub in the city street. Steakley and choreographer Robin Lewis use Raiford's set to full effect; people enter from every conceivable angle, often from way up high, leaping from one of the platforms on more than one occasion. The show has energy to spare, which is unquestionably helpful if you're producing a rock opera.

Larson wrote more than a few really great songs in this show, and John Pointer as Roger, who loves and loses, then loves and loses again, is fortunate to have the best of them. His rendition of "One Song Glory" – a song about writing a great song – captures an entirely human, exultant ache to reach beyond the self. Because Larson wrote such a sprawling play, opportunities to showcase voices abound, and Steakley does so, casting the invariably entertaining Andrew Cannata as Mark, our filmmaking narrator. Cannata nails his "Tango: Maureen," a song about a kind of continuing relationship. He's aided in the latter by Kristen Bennett as Joanne, who is the lover of Mark's ex, Maureen, played by Ginger Leigh. (Haters be warned: There are lesbians and homosexuals and cross-dressers in this hardened gem of a musical.) Much of the first act leads up to Maureen's performance art piece, "Over the Moon," about the cow in the nursery rhyme, and Leigh makes the buildup pay off with an expertly choreographed, knowing, sensual piece. But the number that really rocked the socks of the sold-out house was the kickass "Today 4 U," with Joshua Denning as Angel. In heels big enough to shoe a couple of horses, Denning was all man and all woman – at the same time! With Jason Amato's steamy lights, Allen Robertson's rocking musical direction, Alison Heryer's street-inspired costumes, and Craig Brock's cityscape sounds, Steakley has assembled a production that is more than likely every second as good as the one you could have seen during the show's record run on Broadway. But you don't have to travel to New York to catch it. Just head down a little south of the river on Lamar, and you can cut your own delicious slice of the Big Apple.