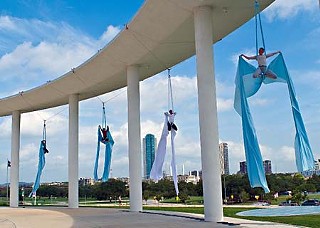 Just before Blue Lapis Light's One began, it was difficult for me to relax. In a site with no wings, no evident "offstage," I felt uneasy not knowing where the dancers would enter from. Nor did I know how they would enter – on harnesses, on silks,

on foot? My eyes continually scanned the area back and forth, up and down, lest I miss something. When dancers appeared atop the ring of the Long Center City Terrace, I wasn't sure how they got there. The illusion of appearance and disappearance, aided by Jason Amato's lighting, was one of the best uses of the round, outdoor space. After the first section, the dancers atop the narrow, second-story ring slowly walked backward, receding from view. On the ground, dancers scampered off the pavilion and down the grassy hill beyond it until they were no longer discernible in the dark; other times, they emerged from below the hillside, my eyes slowly adjusting and catching on as they walked toward the center of the pavilion.

Artistic Director Sally Jacques' aerial dancers are some of the best local dancers – aerial or grounded – I've seen. They stretched their bodies fully out into space, attending to line at all times. This specificity and control is a necessity when up on the apparatus, I expect, but it also seems to be an artistic concern of Jacques'. This refinement is refreshing and is what elevates her work beyond circus and makes some repetitive movements, like the somersault, mesmerizing instead of tedious. When four women on harnesses somersaulted around the columns, midway between the top of the structure and the ground, their landings and soarings were as fluid as if they were underwater. A later section for a pair of male­-female couples suspended in silks was sculpturally lovely, and, if I'm not mistaken, its mood peeked out, a bit cheekily, from beneath the sober intensity of the rest of the show.

This intensity – the upturned faces, the open palms, the clenched-fist-to-stomach maneuvers, all to a dramatic compilation of music from film, opera, and compositions by sound designer William Meadows – was explained in a program note, which referred to anxiety, unpredictable times, and seeing oneself as "part of the divine creative intelligence." But even seen as episodes of meditation and quest, the structure of the piece seemed fragile. The groupings and apparatus-focused sections seemed arranged only superficially: There was a beginning, some divertissement, a slight heightening of energy, and an abrupt ending, but this construction didn't appear to support a larger concept.

Perhaps the venue was partly to blame for the feebleness in the work. Except for the disappearing quality it afforded the entrances and exits, the City Terrace seemed limiting and lacking in drama compared to previous sites, such as the J.J. Pickle Federal Building and the Intel shell. Perhaps this has to do with psychology: Performance is expected at the Long Center (even though it's usually inside), and so the context isn't as arresting as with performances at federal office buildings or abandoned construction sites, both rife with symbolism. Also, the space on the ground begged to be used more. Whenever the dancers descended, they did a lot of lunges and nice port de bras, breaking into a run near the end. Granted, there isn't a lot of exciting dance that can be done on concrete, unless the dancers have sneakers and maybe kneepads, but I trust that the team who figured out how to have a woman gracefully sit atop a man's upended bottom while he is suspended in a two-story length of cloth can come up with something to do on the ground as well.