Everything comes and goes 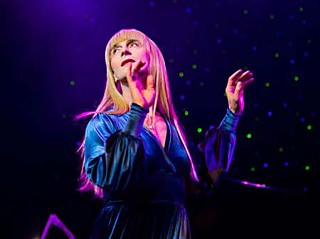 As befits a festival called Fusebox, John Kelly's performance at the interdisciplinary arts fest this year was electric. Immersing himself in the persona of Joni Mitchell – taking on her vocal style, her playing of guitar and dulcimer, her meandering chitchat between songs, even her famously flowing flaxen locks – the New York-based artist delivered a concert retrospective of the singer-songwriter's career that was charged with both the artistry of a master performer and the deep, deep love of a fan. The depth of commitment in Kelly's performance and the truth coming out of it left the hairs on your neck standing. The show made such a profound impression on the writers of the Austin Critics Table that they honored Paved Paradise Redux: The Art of Joni Mitchell with this year's award for Outstanding Touring Show, Theatre.

Now comes word that Kelly is drawing a curtain on the show. Following two performances on Oct. 9 for the Chinati Foundation in Marfa, Kelly plans to retire the piece for good. Fortunately, Austin will have another opportunity to experience the show before then, in two shows, Oct. 6 and 7 at One World Theatre. Miss them at your peril. By e-mail, Kelly reflected on his long journey with Joni Mitchell and why it's time to let her go.

Austin Chronicle: When you came to Austin this past spring, how long had it been since you had performed the Joni Mitchell piece?

John Kelly: The Austin performances in May came after a two-week run of the show in Los Angeles.

AC: What made it worth revisiting for the Fusebox engagement?

JK: In L.A., for various reasons we were compelled to get the seats filled on our own, and it resulted in mixed results. The Fusebox engagement was quite a different scenario in that it is a festival, so it wasn't up to us to do any PR. Festivals are great, as there is a sense of community, of shared experience with other artists' work. It feels like a family situation where you are well taken care of. On the heels of L.A., our show was a finely tuned joy.

AC: It was extremely well received here and won an award from the local critics circle, and people here are excited to have the chance to see it here again. So what's factored into your decision to retire the piece? And why bring it to Austin again before you do?

JK: First of all, that was the very first award this show has received, so we were blown away and grateful. Well, I've been doing different versions of Joni's music since 1985 – that's 25 years, half my life. Paved Paradise, A Way With Words, Constant Stranger, Shiny Hot Nights, and Get Up and Jive were shows comprised of different songs by Joni, some with appropriate banter (the "book" of the shows, culled from her actual words). This version of the show, Paved Paradise Redux, feels like a culmination of sorts, a definitive version of all the shows combined. I'm retiring this show and leaving myself open to the idea of performing some other and penultimate version of it but only in some temple of high art – like Turbine Hall in London's Tate Gallery or the Museum of Modern Art – for a final go in two or three years. I feel it's time for it to go down, either in the desert or a museum. I have many other projects in the works, and this show has lost its priority for me aesthetically, strategically, and financially. I've made the statement I've wanted to make and remain proud of it. The actual final performances of this version will happen right after Austin, at the Chinati Foundation in Marfa, for their Trustees weekend. The desert feels like a fitting final destination, for now.

AC: This may not be something you can answer yet, but I'm compelled to ask: What do you expect it will feel like to perform this piece for the last time?

JK: Since I am leaving a window open for some other reprise, the finality is tempered with a hint of some other possibility. But this work is no longer a priority. Performing this show is like doing a triathlon; I have to be prepared vocally to sing 16 of her songs in their original key, to play guitar and dulcimer, to sing and speak in some semblance of her words (in her different vocal ranges), and in public to dramatically inhabit and dramatize the very specific myth of another artist. It's technically rigorous and debilitating. And a great high. Especially with my collaborators: Kevin Malony, our director; Blake Newman, our handsome bass player; and especially Zecca Esquibel, who is an ace keyboard player and embodies a mean-ass Georgia O'Keeffe.

AC: Is there one of Joni Mitchell's songs or lyrics that in some way sums up your experience of embodying her and performing this show?

JK: "Down to You" has recently figured important to the show, and to me. I choose to sing certain songs because I'm able to muster a relationship that has personal significance and textural gravitas. I can't skim through any of it. The show has been a mission of sorts – to surprise my audience, to educate them, to trump their preconceived notions and transcend their experience of her original renditions. Some covers are more sonically akin to hers, others are more me then she – but once I've established the DNA, once the audience accepts its reality, that all matters less, and the show takes on its own quality, hopefully inevitable – and compelling. 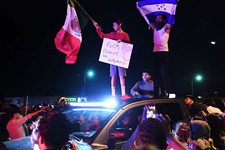 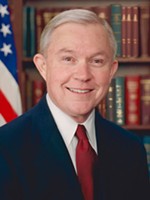