New names for the masthead

Tweet
print
write a letter
When Claire Ruud headed off to obtain her master's in business at the Yale School of Management, she left a large gap in our city's visual arts community. She made important contributions not only as a gifted curator and a perceptive writer but also in her capacity as editor of the online arts journal ... might be good, she also provided invaluable advocacy for – and, occasionally, criticism of – Austin's visual arts scene. Ruud herself can't be replaced, but Fluent~Collaborative, the nonprofit that sponsors ...mbg and the exhibition space testsite, has at least filled the position left open by her departure. Wendy Vogel takes the helm of the publication with issue No. 154, set for release on Oct. 1. Vogel came to Texas last fall after having obtained a bachelor's degree from New York University and a master's from the Center for Curatorial Studies at Bard College. Since her arrival, she's written regularly for ... might be good and contributed to Art Lies and ArtForum.com, She's also a critical fellow in the Core Program at the Museum of Fine Arts, Houston. Working alongside Vogel will be Emily Ng, whose role at ...mbg has been expanded from intern to production associate. Congratulations to them both.

Art Work
Why don't we think being an artist is a 'real job'? 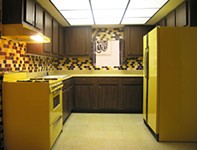