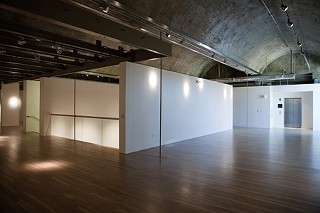 Natural light was not something one saw much of inside the University of Texas Art Building for most of its 47-year history. As with a number of campus buildings of the day, the design favored monumental walls of brick unbroken by any kind of architectural ornament, including glass, which left it little more than a clump of massive, featureless blocks. Passing through the Art Building's doors was tantamount to entering a tomb where the light of day could not penetrate and the living world was nowhere to be seen.

So after decades of navigating that facility almost exclusively by the artificial glow of fluorescent tubes, visitors will find that what's immediately striking about the building's new Visual Arts Center – built from the bones of the old University Art Museum/Huntington Gallery/first Blanton Museum space – is the natural light flooding it. No matter where you turn in its five new galleries, you're either facing a window to the world or the outside light streaming through one. Architects Lake|Flato have worked some of the same magic that they did with another old bunker across campus, the Harry Ransom Center. They broke through the dense, forbidding exterior and let the sunshine in. It not only warms up the space for those inside the structure and allows them a connection to the outside world; it gives those out in that world a way into the building, a glimpse of its interior that invites them in.

Bathed in the light spilling through the new windows of his renovated office on the Art Building's east side, Department of Art & Art History Chair John Yancey notes how those few panes of glass mark a profound shift in accessibility for the department. "The whole building was very much an opaque kind of cube, so the things that punch out on this side of campus are huge for us – for our students and for other students, because like 30,000 students get off the buses [in front of our building] every day. And normally, they get off the buses and head west, don't even cast an eye over here. Now, they're lookin': 'What's that? What's going on?'"

Students and anyone else coming in to discover what's going on inside the Art Building will find in the Visual Arts Center a space at once unfamiliar and familiar, new and old. The two-story layout is much the same as it was, although more floor space has been created upstairs by filling in some open air on the galleries' east end, and the massive spiral staircases that anchored the northwest and southeast corners of the old galleries are gone. Most significantly, the space has been divided into five galleries, each with its own identity.

• The Vaulted Gallery (1,875 square feet), accessed directly from the center's west entrance, is a grand open space that soars a full two stories up to the newly uncovered barrel vaults that have been concealed for decades by a false ceiling. The artists exhibiting here will be early in or in the middle of their careers and will be invited to create site-specific installations that can be developed with the assistance of students. VAC Director Jade Walker says that two or three projects will be generated a year, with the artists in residence in the department for three to five weeks prior to the exhibition opening. "When I was looking at a lot of the artists, we talked about making the biggest piece they've ever made," she says.

• The Arcade (2,086 square feet), east of the Vaulted Gallery downstairs, is a flexible gallery distinguished by large video projectors which are positioned in front of a large window that looks toward Darrell K. Royal-Texas Memorial Stadium so that projected images may be seen by people outside the building as well as inside. "I keep thinking about [the Arcade] as a living-room space or a space for real accessibility for partnerships and collaborations," says Walker, "and it falls in the middle of the building, so that kind of makes sense."

• The Center Space (1,436 square feet), to the east of the Arcade, is an L-shaped gallery dedicated to student-driven exhibitions and events such as lectures and film series. The Center Space Project, a student organization, programs the space based on proposals by current graduate and undergraduate students and alumni.

• The Mezzanine Gallery (2,353 square feet), situated mostly above the Arcade, is devoted to traveling exhibitions and works created by faculty, students, and alumni. Exhibitions are curated by the director or a visiting curator.

• The East Gallery (1,322 square feet), which sits above the Center Space for students, is intended for department faculty, with exhibitions that feature work by the instructors themselves, that they have curated, or that relates to classroom study.

The fact that these venues have such specific functions addressed to specific constituencies is no accident. The department has been looking for ways to more effectively engage its students and faculty members, and giving them spaces dedicated to their efforts is a significant way of doing that. "You have to have an opportunity to interact, exchange, collaborate with other people in the program, with the world outside [the classroom]," says Yancey. "Otherwise, it becomes kind of an archaic experience, frankly, and students don't want archaic experiences. They want something that actually is going to connect to the world and where they feel it connecting to the world as they're doing it. Not something that, 'When I'm finished with my B.F.A., then I'll discover the world.' They want very much for the experience to be part of the world all the way through."

The department chair characterizes the current students as "hungry" for contact with working artists and opportunities to exhibit their own work. The VAC is "a huge game-changer for us, because it allows students to be able to not only participate and envision but to actually do things. Getting art students to want to join anything has been historically almost impossible. The nonconformist trend is so great that, if it's not a small band, the idea of joining things doesn't quite gibe. And to see students now that really want to work together, really want to collaborate. The enthusiasm of putting up that first show in the Center Space gallery was so evident."

Walker, too, has seen a sea-change in the department already: in the students who crowded around artist-in-residence David Ellis and peppered him with questions as he worked on the "motion painting" he was commissioned to make for the Landmarks program, by the 10-15 students a day who have come to the Vaulted Gallery to assist current artist-in-residence Ry Rocklen in building the sculptures for his installation "ZZZ's," and even by the conversations she's had since the Art Building renovation was complete. Prior to directing the VAC, Walker ran the Creative Research Laboratory, an exhibition space for department students and faculty that was located off-campus in Flatbed World Headquarters. As valuable as the space was, its distance meant it wasn't on everyone's radar. "There wasn't as much engagement," says Walker. "Here, there are students that are knocking on the doors in the afternoon, and I'm having way more discussions than when I was off-campus at the CRL."

Yancey credits the opening up of the space as a catalyst for the change. "When people have sunlight and they can see a courtyard and they actually feel like standing there talking to each other, those aren't really tangible things, but they have this intangible effect that kind of compounds and can become contagious in ways. You see it on people's faces, and you see it in body language, and all that is hard to predict, but it's really gratifying when you see it happening. I can walk out here, and it's completely different than when I walked down that same hallway three years ago. It feels different, and people look different when they walk down it."

Yancey speaks of new conversations not just inside the department but with the university, the city of Austin, and the world beyond it. "One of the things that has rippled through and affected our department," he says, "is an idea of: Where are we in the world? Where are we, not just in Austin or in Texas or the United States, but where are we in the world? When you start to think in that way and your view starts to change in that way, expectations change. There's a transformation that has occurred here over the last nine or 10 years and is culminating at this moment. This is a pivotal historical moment." 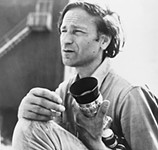 Miles and Miles of Canvas
For 2011, the Texas Biennial lives up to its name by spreading across the state