Comedy is her life, but Margaret Cho is just mad about the music 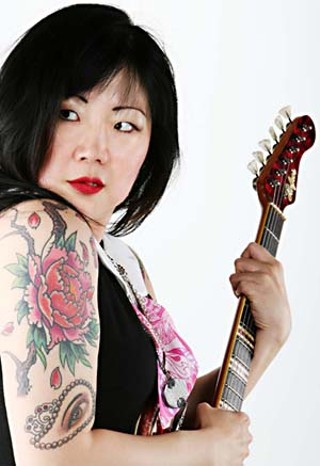 Comedian, bon vivant, activist, sexpert Margaret Cho is not only coming to Austin; she is coming to Austin on tour to support her brand-new album, Cho Dependent. And yes, Cho Dependent is a musical album, a collection of actual songs, not spoofs, not comedic toss-offs, but very funny, very lovely songs featuring collaborations with an array of artists, including Patty Griffin, Andrew Bird, Tegan & Sara, Tommy Chong, Ben Lee, Grant Lee Phillips, and more, and highlighting the extensive musical chops of the lady herself.

Cho plans to release videos for each song in the vein of the recently released soon-to-be scatalogical classic "Eat Shit and Die," directed by Liam Sullivan (of Kelly "Shoes" viral video fame, www.liamshow.com). The remaining songs will be set to video by Sullivan and Cho's hubby, early Burning Man prankster Al Ridenour (perhaps resulting in a full DVD release in the future).

Austin Chronicle: Does singing or playing guitar in front of people feel powerful? How does "rock star" translate to Margaret Cho?

Margaret Cho: It feels intimate. Singing is physical and intimate. You bring people in very closely; it's a very vulnerable thing to do.

AC: Is comedy now your gateway drug, and rocking out is the hard stuff? How does that feel to you?

MC: No, comedy is still the whole point, and it's still everything that I do; everything starts from there. Music is another extension of what I do as a comedian – trying to be a better comic by becoming a musician and adding on to what I do.

AC: Cho Dependent reveals who some of your contemporary musical heroes are, but who were your favorites when you were growing up?

MC: Blondie; I love Debbie Harry. I love Natalie Merchant. They are my favorite singers. I love the Go-Go's and Heart, you know, all those women's voices from the Eighties. Yeah, that's my jam.

AC: That's your jam, girl! When you were a kid and you were being inspired by all of these amazing women, did you play rock star? Like in front of the mirror and stuff?

MC: Yeah, I think so. But I also played a lot of comedian! [laughs]

AC: Really? So did you use a hairbrush as a microphone?

MC: Yeah, yeah. When I was a child, I would have really intense performance dreams about performing stand-up comedy, and it felt exactly like what I do now. You know, it's weird, like I – what I experienced in dreams as a child is what I do now. So, I kind of knew that that was gonna happen.

AC: When did you realize you could sing? Was that something you've always done? Like, as a kid, did you feel like, "I've got a kickass voice"?

MC: I always knew that it was there, but I never really thought about utilizing it as extensively as this.

AC: I love that you've taken it really seriously too as a craft.

MC: Yeah, I mean, it's a big deal; it's really important to me to do it well and to approach everything with a very determined attitude.

AC: What was your earliest musical memory as a kid?

MC: My parents playing piano. My mom playing guitar. They're both musicians and singers. That's where I get it from. We were a big churchy family; there was a lot of church in our house. And a lot of that was about singing – which was what was really enjoyable about going to church as a child.

AC: Were you a bad girl as a teen or the good girl gone bad? Or are you not bad at all?

MC: I was just really quiet, and I was a planner. I knew what I was going to do, and I grew up really fast. I didn't have a very long childhood or adolescence. It's not as if I had an opportunity to find out what I was gonna do, because I was off and ready to do this career so quickly.

AC: It did happen really early for you, didn't it? [Cho was only 16 when she began doing stand-up.]

MC: Yeah, I was just off and gone and doing my thing.

AC: So do you feel like you grew up too fast?

MC: Yeah, of course. I feel like I missed out on a whole area of life. I changed a big part of my childhood in order to grow up and do what I'm doing now. Ultimately, there's always going be a part of you that's really childish and, you know, um, undeveloped. [laughs]

AC: No disrespect to anyone who's on the record, but who would you kill to write songs with and play with, with whom you have not yet?

MC: Oh! David Bowie! He did Scarlett Johansson records. I would really love to write with him.

AC: So what was the first, you know, kind of rock song that gave you that kind of kiddie woody, your earliest musical inspiration that made you realize that you wanted to rock out in front of people?

MC: I've bought that album maybe 30 times over the years. I love that record so much for so many different reasons. It's so good. Either that or Hunky Dory by David Bowie.

AC: I love it; I can see little Margaret Cho! Will you be bringing a band to Austin, or are you playing solo for the show's musical interludes?

MC: I'll play a little solo; I'll be singing to the tracks to retain the sound of the record. Along the tour, there will be people joining me, but I don't think there'll be any there [in Austin]. The show is still mostly stand-up. I wrote a whole new stand-up comedy show.

AC: Is it similar to when you did the Guitarded sets at South by Southwest two years ago?

AC: I'm real happy that you ended up not naming the album Guitarded, even though I think this name is really brilliant. But I felt kind of protective of you, and Guitarded could potentially be read as self-effacing.

MC: I didn't want to get in my own way – to limit my own ability – as a guitarist. I think I got a little spiritual about it. Cho Dependent seemed more appropriate.

AC: Did Guitarded sort of mean more like "guitar crazy," right? Like, "I'm so guitarded!" I'm crazy about music or whatever?

To Sitcom Hell and Back
In Surviving a Comic's Dream Come True, Margaret Cho Has Made a Hero's Journey