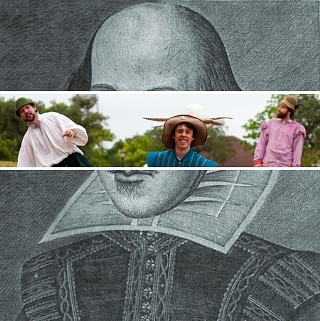 The Complete Works of William Shakespeare (Abridged) is a silly play. The idea is to cram all of Shakespeare's plays into one 90-minute performance, so there isn't much plot. It's basically jokes and gags and a lot of slapstick, with plenty of room for the actors to improvise and interact with the audience.

Complete Works isn't the kind of thing I'd choose to see on my own, but guess what? I had a great time.

Penfold Theatre Company provided an evening of entertainment in which I did not have to think. Ordinarily, I'm a huge proponent of thinking. Thinking is great! Challenging plays are awesome. At the same time, let's all be honest here: It can be really funny to watch a guy in a girl's wig running around pretending to vomit on little kids. That's basically the order of business for Penfold's Complete Works of William Shakespeare (Abridged), under Beth Burns' direction. Audiences wishing for an intellectual exploration into Shakespeare's body of work, including a detailed breakdown of the verse and a post-structuralist examination of the characters, will find Complete Works disappointing. But people who would like to enjoy a pleasant evening of laughter while relaxing on the lawn at the Round Rock Amphitheater will have a great time. There's even a sno-cone trailer nearby.

Ryan Crowder, Judd Farris, and Nathan Jerkins make up the ensemble, and they are all trained actors with a record of strong performances, many of them in Shakespearean roles. Complete Works isn't quite the same thing as performing in the actual Shakespearean plays – the play is more like an evening of improv – but it's an athletic job they have set for themselves. Does every single joke work? Not really, but the energy never flags, and the audience sticks with the play.

Penfold's true strength is in the choices the company has made so far as producers. In the previous work they've produced in Austin, they've staged small-cast, relatively low-tech productions, and they've focused on quality over quantity. They've also consistently teamed with great actors, designers, and directors. Now, as they shift their base of operations to Round Rock, they are continuing to seek out the right kinds of partnerships. Before every performance of Complete Works, a different cultural group from the Round Rock area takes the stage. Aside from adding value to the evening, the additional performances also give the entire evening the feel of a community coming together to have a nice time in one another's company. That in itself is an example of excellent theatre.