I see, therefore I am You witness a crime. You witness a wedding. You witness a miracle. It's more than seeing – the witness participates. Without a witness, the wedding cannot take place. The miracle cannot be believed. The crime cannot be exposed. "And I only am escaped alone to tell thee."

And when you come to live performance as a witness (rather than as a crossed pair of arms, or a texter, or a slumper), you can transform a performance. Choreographer Shawn Nasralla says that when an audience brings "presence and willingness to open to the performance and let it in," that creates "the possibility of a deeper experience" on both sides of the stage.

Tutto Theatre Company's I Witness, opening Friday, Aug. 20, at the Blue Theatre, uses dance, music, spoken word, and the audience's own lovely presence to explore witness. The evening springs from a short piece of the same name that Nasralla, who studied in Montana and taught at the Dance Theater of Iowa before landing in Austin, created for the recent Big Range Austin Dance Festival. With the help of musical genie Adam Sultan and videographer Eliot Haynes, she explored the concept of witness, including the Vedic philosophical idea that self-witness can lead to awakening. She was "thrilled when Amanda Oakley and Tutto Theater Company gave us the opportunity to expand on the theme."

For this longer evening, Nasralla, Oakley, and Jennifer Micallef have choreographed a total of 10 short pieces, including Nasralla's original, which approach witness from different perspectives. Nasralla's "Polarity" is "a playful duet about physicists and electrons" (Heisenberg's uncertainty principle may – or may not – come into play). Micallef describes her pieces as about "being witnessed in vulnerable and surprising moments, as well as what we witness in our dreams." In "We Collide," she and Oakley "perform a duet about surprise – being together and fully responsive to every moment of touch and separation." Oakley's pieces deal with witness in the context of intimate relationships.

Most of the pieces include texts (performed by actors Lizzi Biggers and Alex Cogburn) from writers like modern-day mystic Eckhart Tolle, old-school mystic St. Augustine, and the multiple literary personalities of Portuguese modernist Fernando Pessoa.

In the past year, Tutto Theatre has won several B. Iden Payne and Austin Critics Table awards for its theatre work. Does the recent departure of Artistic Director Dustin Wills and the production of a dance piece mark a company in transition? Interim Artistic Director Matthew Ervin reminds us that Tutto was "founded to create multidisciplinary works," so the dance/spoken word I Witness is "an opportunity to embrace other aspects of our mission."

Given Tutto's history, it's an opportunity worth checking out. Bring your whole self and see what you can help create. 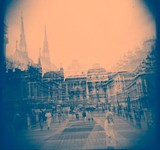 I Witness
This dance/spoken-word production embodies our waking, sleeping dream

'The Dudleys!: A Family Game'
Game play begins ... with vodka

Tutto Theatre Company
If it's Tuesday, this must be Bomarzo