You may have thought that in the 34 years of taping in the KLRU studios, every kind of musician must have played on the set of Austin City Limits. But it wasn't until February 2010 that the stage, with its signature skyline of the capital city, played host to a pair of classical musicians. Cellist Bion Tsang and pianist Anton Nel, both respected artists around the world and faculty members in the Butler School of Music at the University of Texas, had the honor of being the first classical musicians to play in KLRU Studio 6A when they taped a half-hour special for the PBS affiliate's Lone Star Emmy Award-winning arts series In Context.

Appearing on KLRU is something that Tsang and his personal representative and publicist Laura Bond Williams have wanted to do for several years. Williams had an in with ACL co-producer Jeff Peterson from having worked as a publicist at KLRU in the Nineties, and Tsang worked with him in 2008 when Peterson produced the Conspirare PBS special on which Tsang was a guest. When Tsang and Williams were looking for a way to mark the release of a new CD by Tsang and Nel, Bion Tsang and Anton Nel: Live in Concert, Brahms Cello Sonatas and Four Hungarian Dances, they approached Peterson about having it in the ACL studio. "Because Jeff is a fan and a longtime friend," says Tsang, "he talked to [In Context producer] Dutch Rall, who said: 'That's great! Can we turn on the cameras?'"

The result is 30 minutes of sublime musicianship from two artists whose work together reveals not only their individual mastery of their instruments but a collaborative style rooted in a friendship of long standing. "Anton and I first met and worked together in New York City for the Cosmopolitan Chamber Players almost 20 years ago in the early Nineties," says Tsang. "From day one, it was so easy to work with Anton. He is a great, great pianist and solo artist, yet he is so sensitive to blending and letting his colleagues shine when it's their moment. Not many pianists have that gift. Rhythm is so important, especially when working collaboratively. I think we have a very similar sense of rhythm and timing, such that we usually don't need to look at each other to know what is coming next.

"From 1996 on, we began seeing each other every summer – and occasionally in the winter – at the Seattle Chamber Music Festival. The chance to be in the same city working at the same institution as Anton was one of the main reasons why I considered and decided to come to Austin to teach at UT. Of course, having had a history of nearly 20 years with Anton makes collaborating easier and easier. I enjoy our rehearsals so much because they end up feeling more like performances than work. It's always like a walk in the park."

The challenge for Tsang and Nel in approaching the TV special was how to limit that two-decade history of playing together and two CDs' worth of material into one half hour. "We did need to make adjustments for the time constraints of the broadcast as opposed to preparing for a normal recital, which can really be any length of time," says Tsang. "We ended up presenting individual movements of works and, in the Beethoven [the Sonata in A major], playing no repeats. In doing so, we were able to fit more pieces and cover a broad spectrum of musical styles, from light and virtuosic [Luigi Boccherini's Sonata in A major] to über-romantic [Sergei Rachmaninov's Sonata in G minor], from modern and sarcastic [Dmitri Shostakovich's Sonata in D minor] to gypsy [Johannes Brahms' Hungarian Dance No. 1]. They are all selections that we felt would appeal to every listener, no matter how seasoned."

So how did it feel to take the same stage where Willie, Stevie Ray, and pretty much every legend in the music industry have all recorded? "There's no question that I felt a special vibe that night," Tsang notes. "Even though the ACL backdrop was covered and so, to the television viewer, it isn't apparent that we were playing on the ACL stage, everything else was the same: the cameras, the sound, video and lighting crews, the audience stadium seating, even the backstage room and the walk down the hallways to the stage. I certainly was aware of the space and the history there and am very proud that Anton and I were the first classical musicians to perform in the ACL studio."

One other characteristic of the taping that was just like ACL: an enthusiastic crowd, Tsang reports having "an amazing audience – a wonderful, eclectic mix of all ages. Anton's and my students turned out in full force. A contingent of teachers from Clayton Elementary were present – my oldest son attends school there. KMFA listeners and staff came in droves, including Dianne Donovan, Sara Hessel, and Joan Kobayashi. And many KLRU supporters were there, including Sharon Watkins, Bill Bishop, and Julie Ardery. It is notable and so appropriate that Dr. and Mrs. Ernest Butler were among the very first guests to arrive, because Austin arts and education wouldn't be the same without their support and commitment."

In Context, featuring Bion Tsang and Anton Nel, will be broadcast Thursday, Aug. 26, 8pm, on KLRU. Video performances of Nel and Tsang may be found at www.youtube.com/user/momentumpr. 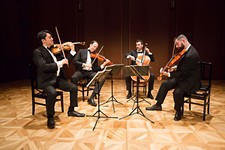 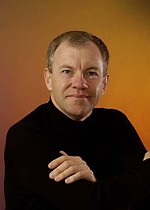 Anton Nel
'Do I have the piano for you!'