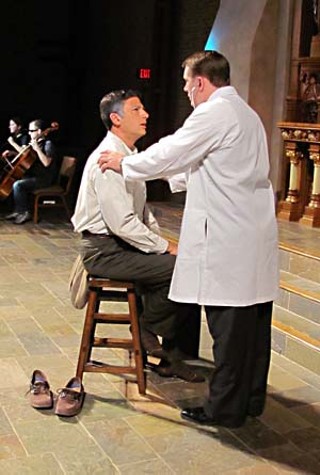 Imagine that grand form of music drama, the opera. Now lose the three-story sets and the racks of opulent costumes. Lose the huge chorus and army of supernumeraries. Cut the cast by two-thirds and the orchestra by three-fourths. Now take the rest and slide it into a venue with one-tenth the seating of the standard concert hall. What do you have?

Something that still possesses opera's compelling musical drama and beauty but delivers it with the intimacy of, well, a chamber music concert. Which should give you a good idea why Michelle Schumann has made a point of bringing chamber opera into the folds of the Austin Chamber Music Festival since she became the Austin Chamber Music Center's artistic director in 2006.

"The thing that I like to do with the festival is have a certain amount of eclecticism," says Schumann. "It's really nice to be able to present a bunch of different genres, [like] opera or dance, to bring the smaller, more intimate varieties of those large art forms to our audience. People are able to experience them in a way that is just impossible in a 2,000-seat auditorium."

Given the enthusiastic reception for the festival's first two ventures into chamber opera, Grigori Frid's The Diary of Anne Frank in 2007 and the 2008 pairing of Schubert's Winterreise with Goethe's The Sorrows of Young Werther, it's hardly surprising that Schumann has scheduled a third for 2010. So here comes the 1986 one-act The Man Who Mistook His Wife for a Hat, adapted from the neurological study by Oliver Sacks by composer Michael Nyman. But there's a big difference with this little opera: Where its two predecessors were both existing productions imported from Long Beach Opera, the new show is being built from the ground up by the festival itself.

Now, mounting a chamber opera on her own is not something that Schumann would have likely attempted, given the complexity of the project and how much the process differs from that in the work she does. "There are so many more moving pieces to an opera than to any chamber music concert," she explains. "In a chamber music concert, everyone rehearses ahead of time, and they show up, and you set up some chairs and stands, and they do a fantastic show. With these operas, we put them together in the time we're allotted to put them together. The past shows at the festival were staged at Long Beach Opera with the same personnel in preceding seasons, so they had already been workshopped. But still, you have to re-put together the production in two days. So the stress level of something like that, that has so many moving pieces, is out of the realm of what's normal in chamber music."

Schumann, however, was nudged to develop a homegrown production by someone with a good deal of interest in the matter and not a little experience. Kevin Patterson, general director of Austin Lyric Opera, felt the festival needed to be producing its own chamber operas and wanted his organization to be involved. Patterson has been a fan of the form since he was a student in the music school at Indiana University, where he was introduced to chamber operas through a local radio show hosted by a retired music professor. Then Patterson was tapped by the dean to head the school's chamber opera company, which would get booked by small presenting arts festivals in Indiana, Illinois, Kentucky, Ohio, and Michigan. "We'd always have a couple of kids' operas, a couple of dramas, and a couple of comedies, and it was literally a bus and truck around the Midwest."

"They were fabulous to do from a young singer's perspective," says Patterson, "because a lot of the early composers wrote chamber operas, and you could learn the style of the composer from their chamber operas. And for me, being a young director, they were wonderful ways to cut your teeth on smaller formats, and chamber opera by its nature is very theatrically driven, so they made you look at them from a theatrical bent. You were shaping the arc of the piece, breaking down the individual scenes, and studying the motivations.

"That was my first brush with them, and out of those, I developed a love for these pieces. And audiences loved them. They were great introductions to opera. I always chose to not do chamber operas in a proscenium theatre because they weren't written for theatres. Most of these pieces were written for drawing rooms and open-air spaces and courtyards and all sorts of funky things. And back in Mozart's day and Rossini's day, it was the social entertainment of the weekend; there was gambling, and there were parties, and the house lights weren't turned off, and people could read librettos and talk to each other, and it was social. That's what opera was. And chamber opera returns us to that social atmosphere."

After seeing the production of Winterreise two years ago, Patterson had the thought that ALO ought to be collaborating with the festival. Over coffee with Schumann at, fittingly enough, Mozart's, he pitched the idea of Austin Lyric Opera being a partner in the festival. She liked the idea, and with the stipulation that the chamber operas be contemporary, they began to look for a work they could produce together. Initially, they looked at Benjamin Britten's Church Parables, three one-acts drawn from biblical stories and a Japanese Noh play. "We liked them musically," says Patterson, "but the dramaturgy is very specific, and we thought that level of theatre might be too complex for an audience member to jump into the first time."

Looking for alternatives, Patterson went to a shelf where he keeps a couple dozen scores that he hopes to stage someday. There he found The Man Who Mistook His Wife for a Hat, a chamber opera he'd discovered shortly after Nyman won the Golden Globe for his film score for The Piano. Patterson was fascinated by both the story – "that you could do an opera based on a neurological diagnosis" – and the musical texture: "Nyman's formal training was in baroque music, but he dabbled in jazz and blended these two together and said, 'This is my music.'" Patterson handed the score to Schumann and said, "Let's do this." Schumann knew the composer's work – in addition to his film scores for Jane Campion and Peter Greenaway, Nyman has written dozens of works for orchestra, band, and voices – and was a fan of Sacks' writing and had read his book The Man Who Mistook His Wife for a Hat, but she didn't know there was an opera mashing up the two. She played through it and told Patterson, "Yeah, let's do this."

Part of what appealed to Schumann was the way the composer integrated the character's medical condition into the score. "Nyman wanted to write an opera that would reflect what was going on in the storyline," she says, "so it's a bit of a psychoanalytical opera, and you can hear it in the music. The main character has this neurological problem, [and] there are some neurological problems in the music: lots of quick changes of character, of tempo, and of texture that are a result of the inner workings of the character's thought process."

Patterson thinks The Man will ease audience members who are new to chamber opera into its scaled-down, intimate world. "It's a nice bridge piece," he says. "You have two locations, the doctor's office and the home of Dr. P and Mrs. P. The orchestra has instruments that everyone would recognize; it's a quintet with a harp and a piano. So there's enough linkage with a formal opera that you're not completely obliterating everyone's preconceptions about what opera should be. And that's important because we have to be able to take people on a journey, and you can't start jumping people too far. They'll say: 'I can't relate to that. I don't get that. That's too far outside my comfort zone.' So you have to be able to make that journey in little steps, and The Man Who Mistook His Wife for a Hat does that."

But for an organization such as Patterson's, whose bread and butter is the stage grandeur of traditional opera, chamber opera poses a challenge. "The tendency of regional operas when they get into pieces like this is to overproduce them," he says. "When you have a lot of resources, the tendency is, 'Oh, let's go out and hire a director and design team,' and all of a sudden, what's really a chamber opera ends up being a $200,000 production. When [set and lighting designer] David Nancarrow and [ALO Technical Director] Vince Herod and [ALO Production Manager] Susan Threadgill and I sat down with Michelle, and [ALO Principal Conductor] Richard Buckley was involved, we said, 'How simply can we do this?' We need to sculpt the environment so the audience is brought into this world, as opposed to being at the Long Center with that fourth wall of the proscenium. Traditional proscenium theatres are very much like audiences looking at an aquarium and watching the fish swim around. They can have that physical detachment of 'I'm observing that world. I'm not in it.' With The Man Who Mistook His Wife for a Hat, there are 64 seats where the audience is less than six feet from the singer. And some of the seats, the audience is sitting literally shoulder to shoulder with an orchestra member. So they're going to be right in it."

Schumann notes that the shift in form also allows for a shift in process: "When you're looking at traditional opera, usually there's a top-down approach. You have a conductor who has a very clear idea of what he wants, and then he makes that happen with his orchestra. You have a director, who has a very specific idea of how he wants things to look. I don't think it's all negative; it's just a top-down approach. With chamber opera, I see it as far more of a collaborative approach. When it's small, you can take time to explore the individual person's ideas. It allows for a richness and camaraderie and rapport onstage that you might not otherwise be able to achieve."

According to Schumann and Patterson, the collaborative interactions among the artists in early rehearsals were already bearing fruit. Which suggests that the lucky few who are able to attend The Man Who Mistook His Wife for a Hat this weekend – alas, all three performances are sold out – will encounter a music drama that is compelling, intimate, and quite different than opera as we often imagine it.

"Everyone has an idea of what opera looks like, and that's grand opera," says Schumann. "This is a storytelling piece. In some ways, it's closer to musical theatre, and in some ways it's a very personal story as well."