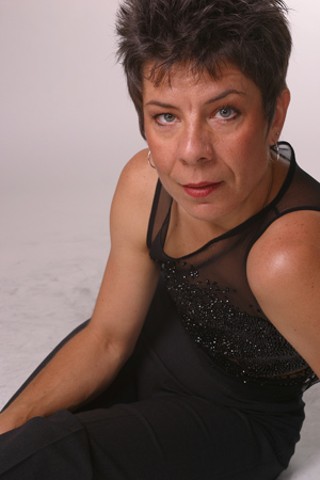 The great American art form of rhythm tap couldn't ask for a more graceful practitioner or more committed advocate than Acia Gray, and now it's giving her a great big thank you. On July 10, the American Tap Dance Foundation will honor the co-founder and longtime artistic director of Tapestry Dance Company with a Hoofer Award, presented to prominent tap artists for "their unique contribution to the form and for inspiring future generations." Those of us who have been fortunate to see Gray's masterful footwork on local stages for three decades, her skill as a choreographer of tap, and her company memers' proficiency in the form know how deserving of such an honor she is. But it's gratifying to see that recognition for Gray's gifts aren't limited to our town.

And as honors go, this one is major. Only 14 people have been given a Hoofer Award to date, and they represent the top of the field: tap legends Gregory Hines, Ernest "Brownie" Brown, Jimmy Slyde, Mercedes Ellington, and Buster Brown. This rarefied company also includes peers of Gray's who have been part of the Soul to Sole Tap Festival that she founded and has run for 10 years. Like Gray, Dianne Walker, Brenda Bufalino, and Sarah Petronio belong to a "lost generation" of tap artists – mostly women who studied with the founding tap artists of the 20th century and kept their traditions alive but without the fame or attention accorded to younger dancers such as Savion Glover. Acknowledgment of their efforts is especially meaningful.

Not that Gray was expecting it. She hadn't a clue that she would be one of this year's Hoofer honorees – the other is Dormeshia Sumbry-Edwards – until she received a call from the foundation's executive director, Tony Waag. "I just kind of sat there," Gray says. "When you hear it, you can't believe it. Really? I started to think, 'What have I done to deserve it?'" But even Gray admits that keeping the country's only professional tap company going for 20 years and taking over the International Tap Association, for which she currently serves as president, are notable achievements. And Gray's efforts, including her artistic mastery, have already inspired other honors: induction into the Austin Arts Hall of Fame, a Legacy Award from the Third Coast Rhythm Project in San Antonio, and a Texas Tap Legend award from the Dallas Dance Council.

Presentation of the Hoofer will take place during Tap City, the New York City tap festival that Gray has attended for years as a performer and teacher. And this year will be no different; she'll be leading classes, then dancing in an all-star program at Symphony Space on Friday, July 9. But on Saturday, Gray will have to sit and let people pay tribute to her in the 2010 Tap City Awards ceremony at the New York Public Library for the Performing Arts. And one of those people has a special connection to Gray: Nicholas Young, a Tapestry company member for years and protégé of Gray's. "After I got off the phone with Tony, I turned to Deirdre [Strand, Gray's partner] and said, 'The only thing that would be more perfect is if Nicholas was involved.' And he is. He's dancing a tribute for me." 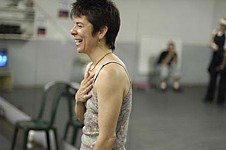 Acia Gray: From Austin, an Ambassador of Tap to the World
The artistic director of Tapestry Dance Company has just been named president of the International Tap Association