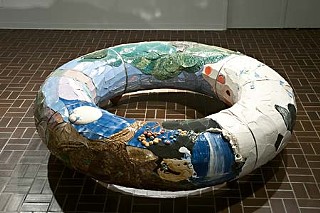 In a summer darkened by the calamity in the Gulf of Mexico and by catastrophic storms in the East and fires in the West, one doesn't expect to see heaven and earth poised in harmony.

And yet, in a room of the Downtown galleries of the Austin Museum of Art, there they are, these contrasting aspects of nature in rare and beauteous balance, as embodied in two sculptures by Austin artist Sunyong Chung and exhibited as part of the museum's ongoing "New Works" series.

With the work One Year, we are squarely earthbound. The massive ring, nine feet in diameter, sits low to the ground, about the height of a bench, and its massive solidity and weight contribute to the impression of it being rooted there, an outcropping of the planetary crust. Porcelain tiles cover its surface, inside and outside the ring, depicting a progression of the seasons, with representative images of the natural world in each portion of the year: mountains blanketed in snow, trees luxuriant with new green foliage, pale blue waters, ripe cherries ready for harvest. Chung has covered the structure with dozens and dozens of tiles, and the images on them are both large and small, so that a stroll around the sculpture yields delights in the discoveries of her tributes to nature: a sequence of a setting sun (or is it rising?), the smiling skull of a toothy predator, silhouetted birds winging their way across a lilac patch of sky. Indeed, the vantage point of most viewers will be that of a bird, or perhaps a deity, high above the earth where all the beauties of the earth in its cycle of life can be observed. And Chung's depiction is so captivating that one is tempted to keep walking and go through that cycle of life and rebirth again and again and again.

Tearing oneself away from the earth leads, however, to a reward in heaven. The companion sculpture to One Year is as much of air as its fellow is of earth. The Dance is an 8-foot vortex of paper and string suspended from the ceiling so that it hovers above the floor. To be fair, Chung's inspiration for the piece, as revealed in the printed pamphlet produced for the exhibition, owes more to cellular spirals and twirling dancers. To my eye, though, the structure suggests those spectacular, churning towers of clouds sometimes seen during serious storms. The circular layers of crimped white paper – imagine a levitating stack of giant Elizabethan collars – are as light as One Year's tiles are heavy and, with the ample spaces between them, suggest the insubstantiality of those snowy sky dwellers. And though it's clearly hanging there by strings, because the air generated by your own motion around it will cause the piece to move, it feels more like it's floating.

As with One Year, you're drawn to circle The Dance, and each turn brings happy discoveries. In this case, Chung has inserted into each of its layers elaborate little paper sculptures: cones within cones within cones, like a nesting doll of miniature twisters; platelike circles punched with so many holes as to resemble lace doilies; banners shredded almost to the fineness of hair; delicate cut-out figures that call to mind silhouetted paramecia. In this white-on-white structure, some are camouflaged like white rabbits on snow, and seeing them requires more than a casual look. But then, peering in is part of the pleasure of the piece; you become like one of those pilots flying a small plane into the eye of a hurricane, to spy that which is hidden so high above the earth. And part of what you spy here is a monumental steel corkscrew spiraling through all that paper, the metal spine on which all this airiness is hung. This weighty bar is startlingly incongruous in the midst of so much lightness, and yet it also seems to belong here, like the booming thunderbolt that lives inside the feathery cloud.

In leaving Chung's sculptures through the galleries currently filled with digital images by Chris Jordan, you're confronted with staggering levels of consumption by the human race and its deleterious impact on the environment. Seeing them after seeing One Year and The Dance adds to our appreciation of what we're losing through this rampant waste. Through these two ambitious and exquisitely crafted works, Chung has given us a glimpse of nature unravaged by man, of heaven and earth in balance, in harmony. Not Eden or Paradise, just the world as it should be.