Even with an uneven staging, Paul Rudnick's biblical comedy is a fabulous play 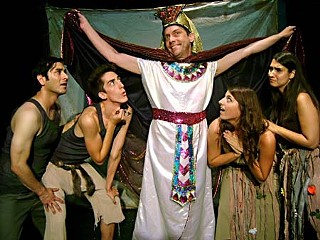 (Bet you saw that coming.) After they get out, they meet Jane and Mabel, invent a whole bunch of stuff, including canapés and pressed linen, get caught in a great flood, have sex with a variety of animals, and are captured by a pharaoh.

And that's just the first act, which ends with Mabel's immaculate impregnation and the birth of Jesus Christ. The second act is a bit more conventional, since it encompasses a single Christmas evening in a New York City loft instead of the entire length of the Old Testament and part of the New. You see the same characters, and they're all still gay, but now one of them is about to have a baby and one of them is about to die.

Ya gotta say it: Playwright Paul Rudnick has some guts. But while you might think the Christian faith takes the greatest skewering in this great gay opus, you'd be thinkin' wrong. Rudnick makes fun of gay men and lesbians more than he does Christians. Rudnick has a soft spot for the birth of Jesus Christ (how could you not?) and for Christmas as well, but not necessarily because he believes Christ was the son of God – I think he just loves babies – or that he considers December 25th a great religious holiday – I think he just loves the kitsch. More than anything else, The Most Fabulous Story Ever Told is a celebration of love. Granted, it's gay love, but gay love is still love, people! Christianity is only the backdrop.

City Theatre's production of the play doesn't quite come up to Rudnick's script, but that would be difficult to do since you have to do the creation of the world right at the top. Director Daniel LeFave has his actors play a campy style in the first act, and it works well for the most part, particularly in the hands of Scott Poppaw, who plays the Pharaoh to over-the-top perfection. But some of that style bleeds into the second act, and it doesn't serve quite as well in a New York City loft. While some of the other performances stand out, especially Elizabeth Bigger's turn as a very sweet Mormon, some of the character choices seem arbitrary, based more on the choice of acting style than on the circumstances of the play.

About 30 protesters were standing outside the City Theatre on the night I attended, holding up quotes from the Bible and images of the Virgin Mary. Ostensibly, they were from a Catholic charitable organization called America Needs Fatima and were objecting to the play's depiction of the Virgin Mary as a lesbian. I found it refreshing, in a way, that they were not protesting the depiction of the first man taking it up the ass.

Or perhaps they just hadn't seen this fabulous play.