The most fabulous protest never staged

Tweet
print
write a letter
Want to hear a fabulous story? Back in early May, Austin's City Theatre Company began receiving postcards and e-mails protesting its upcoming production of Paul Rudnick's The Most Fabulous Story Ever Told, a comedy that partly retells the Old Testament as a homosexual love story, with a first couple named Adam and Steve and a lesbian couple named Jane and Mabel. (The postcards do not mention the second act, in which a modern-day Jane, having been impregnated immaculately at the end of the first act, is about to give birth to what we can only assume, given the context, is the Second Coming.) As of May 14, the theatre had received more than 5,000 e-mails and 500 postcards, 99% of which came from out of state and took exactly the same form: The play's depiction of the Virgin Mary as a lesbian is blasphemous, and if the theatre goes forward with its Fabulous production, then Catholics "will oppose it in one of the largest and loudest peaceful and legal protests ever seen."

The protest was initiated by a group called America Needs Fatima. ("Our Lady of Fatima" being a reference to the Virgin Mary, who allegedly appeared as an apparition to three children in Fatima, Portugal, in 1917.) Go to www.americaneedsfatima.org and you can view ANF's fabulous website, which currently includes home page articles on a cartoon of the Pope sodomizing a little boy and "The Real Truth About Purgatory." You can also see all the ANF campaigns, including the anti-blasphemy campaign, part of which is presently aimed at the little 80-seat community theatre right here in Austin. Through the ANF website, you can enter fake names and e-mail addresses to a form letter and protest the play as many times as you like!

While City Theatre is prepared to meet the protest, one probably won't materialize. According to Stacey Glazer, a City Theatre company member who researched previous productions of the play, at least two other theatres in the U.S. – the New York Theatre Workshop, which produced the premiere in 1998, and Unhinged Productions in Houston, which staged the play in March – received similar threats of protest from ANF, but neither of the protests materialized.

Now why would ANF want to stir up controversy if it didn't intend to follow through? According to Carl Matthes, who wrote an article on ANF for the e-zine LA Progressive, ANF is an offshoot of a Roman Catholic charitable organization called the Foundation for a Christian Civilization. FCC allegedly uses approximately 75% of donations for "charitable purposes," which leaves 25% for noncharitable purposes. Matthes states that ANF took in $7.3 million in 2009, allowing for about $2 million for noncharitable endeavors. And ANF is only an offshoot of FCC.

A question that some might have already considered: What would Jesus do? Well, given what we know of him, Jesus might say: "Priests and ministers, remove your robes and sell your jewels. Give all that money and any other money you collect to the poor. Be kind, gentle, loving, and compassionate with everyone, for each of us is a child of God. Even lesbians. After all, a lesbian could be someone's mother."

Could even, perhaps, be the mother of God. 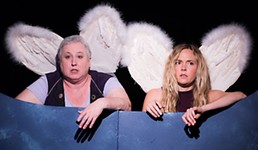 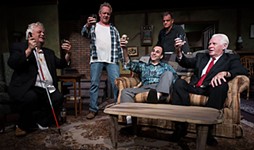 More The Most Fabulous Story Ever Told 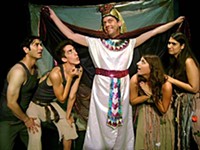 The Most Fabulous Story Ever Told
Even with an uneven staging, Paul Rudnick's biblical comedy is a fabulous play