ColdTowne as Sketch Central? With this comedy show, the club is halfway there. 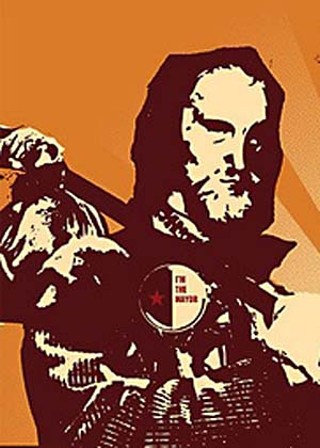 This city, as you're likely aware, is lousy with improv. This city, as you may have noticed, is a hotbed of stand-up. What's been lacking, the longtime topical antics of Esther's Follies and the interstitial hijinks of Master Pancake mockery notwithstanding, is a decent sketch comedy scene.

Enter ColdTowne Theater, a venue striving mightily to establish itself as Sketch Central. Toward this end, it has featured the multimembered Midnight Society, the duo of Your Terrific Neighbors, and various talented others throughout the previous year. It debuted, earlier this annum, the app-riffing show Eye for an iPhone as directed by former Second City comrade (and current Frank Mills stalwart) Dave Buckman. And now, what we're considering here, they've got a show called Shanty Town Lake.

The first reason is the way the show is structured. There are scripted narrative bits, and there are instances of improv; there are a couple of song-and-dance numbers; there are random bursts of absurdity unconnected to anything else in the show. All these parts are performed – by Elizabeth Brammer, Michael Jastroch, Josh Krilov, Rachel Madorsky, Bryan Roberts, and Justin York – with much enthusiasm and varying levels of finesse under the direction of the above-mentioned Buckman. Some of the parts were better created than others, but, on average, yeah, it's good stuff. One could do worse when roughly following the theme of economic collapse and societal dissolution.

But, right, the structure. The situation of homeless folks trying to amuse themselves sets the stage, and from there the action proliferates. One sketch will segue logically into another, then be broken by a spate of singing which clears the mind's palate for a totally unrelated sketch, which might be punctuated by a 10-second glimpse of something totally random and funny before moving to an improvised vignette, then back to another logical sequence of narratives. This seems, at least, to be orchestrated for best impact, not just thrown together haphazardly: There's a staggered rhythm going, making sure that the audience isn't lulled into complacency by the same old same old. (The rhythms are abetted figuratively and literally by Le Sexy's Jason Laney, offstage and on keyboards and the best of the vocals.) What this structural rhythm is most reminiscent of is the Laugh-In TV show from decades past: effective then, effective now.

And the second reason this show might kick your ass in a pleasurable fashion is that it's chock-full of Bryan "Lubu" Roberts. This guy, this fuckin' guy, when he's playing the homeless mayor of Austin, he's like some mad cross between Ferris Bueller and a tweaking Smurf's version of Snoop Dogg. Even when he's not getting his funky ghetto on, the mere presence of Roberts on the boards is enough to double the wattage of performative goodness. A few of the gambits in Shanty Town Lake had me chuckling at their cleverness, but it was the bits with that ruddy-haired goofball that reduced me to tears, actual tears of laughter. Yeah: Me and the rest of the audience, howling.

In the battle to establish a decent sketch-comedy scene, Roberts may well be the not-so-secret weapon that defeats any adversary – especially when embedded within a structure directed like Dave Buckman directs Shanty Town Lake.

Sketch Central, is that the idea? Cold-Towne's at least halfway there.