This ancient satire is still timely, but new material here gets in the play's way 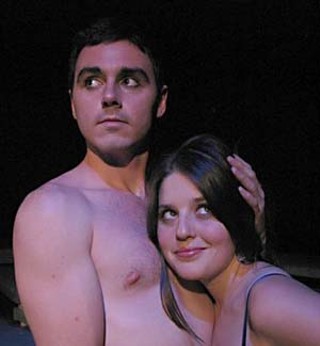 Some plays never grow old, much less die, and Lysistrata is one of them. Written 2,500 years ago by Aristophanes, that most classic of comic writers, it follows a group of Greek women, each representing one of the ancient Greek city-states and led by the clever and articulate Athenian Lysistrata in their attempt to end the seemingly endless Peloponnesian War by denying sex to their men.

Now you have to admit, this isn't such an outrageous idea. While some might brand me sexist, since I am a man I can say with a great amount of certainty, if not outright assuredness, that the brains of men, generally speaking, are located in the region of their groins. Given that you allow this seminal assertion, it's a very short step to conclude that if women would deny sex to men, women could rule the world. And given the state of the world today, much less in ancient Greece, why more women haven't tried it is beyond me.

But beyond Aristophanes, not many have. If Lysistrata is any indication, Aristophanes believed that women – Greek women, at least – were as desirous for close, moist physical contact as Greek men. The women in this play desire and even seek sexual release as much as the men. But despite its comic trappings – and there are many of them, including more ridiculously erect phalli than you've probably ever seen on any stage, unless you've seen this play before – Aristophanes was making a political statement. He used the guise of comedy to pursue what he saw as the follies inherent not just in relationships between the sexes, but in Greek culture. Certainly director Michael Floyd and the cast of this Chaotic Theatre Company production see the play that way, as they've chosen to write original material addressing contemporary sexuality and culture and intersperse these writings among the scenes of the play.

And if there's one thing that doesn't work about the production, it's these original writings. Four involve monologues delivered with a book in hand, and while I sympathize with the common theme – that both women and men are stereotyped and objectified sexually, interpersonally and in the culture at large – the monologues don't expand on the play; rather they obstruct it. They interrupt the action because they are not comic, are delivered in a style entirely different from that used in the play, and seem to be telling us how we should think about what we're seeing. Even though I'm certain the sincere intent was to reflect the play in a personal sense, in context, the pieces seem to proselytize. (To be fair, the final original piece works powerfully and provides the most intense and effective moments in the production.) And despite all those incredible phalli and the presence of a lot of attractive actors in various states of undress, there really isn't a lot of sexual heat in the play. It's almost as if, despite their revealing personal words, the actors are hesitant to come too close to their very close, very physical subject. Heat, though, is what this play and what this production most need. Because if there's one thing Lysistrata most definitely is, it's hot.