The strength of Vortex's original musical adaptation is in its imagination 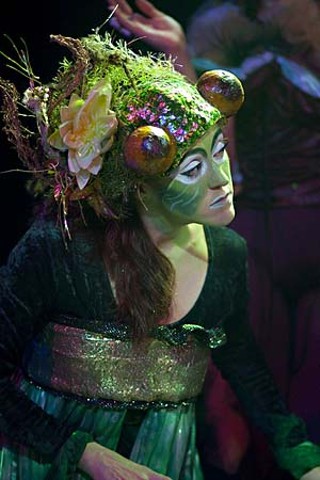 The production of Sleeping Beauty at the Vortex is a show with a vision. Bonnie Cullum (also the producer and director) and Content Love Knowles wrote the book and music for this family-friendly adaptation of the fairy tale. They pack 19 enthusiastic actors, plus musicians, onto a not-so-humongous stage. The company stretches the imagination by reaching to the world of fairies and sprites for a new dimension to the age-old story.

But really? It's the costumes. Pamela Fletcher-Friday's costume design expresses better than any line of dialogue the play's vision. From a jester with a tiny birdcage on her head to a Prince of the Wind with a headdress of goggles and eagle feathers, the costumes, along with Helen Hutka's makeup design, portray a dreamworld constructed of bits and pieces from many places and times. Don't try to connect it to some historical reality; rather, grab onto the fragments you can recognize and let them create something original.

The adaptation is solid, but don't go expecting a Disney version or an interpretation that's chock-full of grand sociopolitical ideas. This is a simple story. The king and queen of this particular land have maintained a friendship and alliance with the fairy world for many years, and it's with the help of the fairies that they conceive the title gal of the play herself, aka Briar Rose. A little slipup with the invitation list for the baby's first party means a curse from the jilted fairy queen (Suzanne Balling). One thing leads to another, and suddenly it's 116 years later and, boy, is everybody in the castle really late for work.

The two highest points of the evening are the dance numbers involving the whole cast, which showcase the energy at work, and in meeting the stir-crazy, teenage Briar Rose (Julia Lorenz) in Act II. See, the advantage of creating a pseudo-historical world in which women might wear a corset, a crown, and Chuck Taylors all at once is that it liberates actors to make specific, surprising choices. You can get by okay just assuming a general British or transatlantic accent and, if you're a fairy, continuously waving your arms and feet about in a vague imitation of barre exercises. Or, if you're brave enough, you can create a character with recognizable feelings and actions in a strange and fantastical world. Lorenz does such a great job at this that you have to wish her character had been old enough to give the performer stage time in Act I as well.

The strength of Sleeping Beauty is in its imagination. Other plays this season will prove more revolutionary; this show wants you to have fun and play along. It's a noble ambition in and of itself.