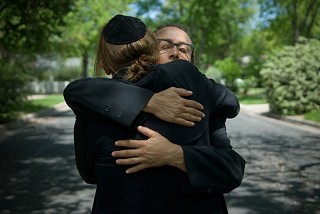 This Sunday, April 11, Jaclyn Pryor draws the curtain on a performance piece that has had one of the longest runs in Austin arts history: seven years. Now, floodlines has only been performed seven times – once every spring since 2004 – but the fact that Pryor had a vision of staging this dreamlike tour through the Hyde Park neighborhood for seven straight years and saw it through is remarkable. The final run, which accommodates only 40 people riding in 10 Volvos, is sold out. Still, we couldn't resist asking Pryor about the experience of sustaining floodlines over so much time.

Austin Chronicle: What about floodlines is different for you now than what you thought it would be seven years ago?

Jaclyn Pryor: It's funny – for a performance about repetition, there is so much visible difference and change that's transpired between 2004 and now. Nate Zivin, the 6-year-old boy who used to play my childlike double, is now 13 and towers over me. His little brother, Jacob – who was in diapers when we began the project – has stepped into that role, while Nate has gone on to compose and perform original music for the show. Another actor has died; many have moved away. New bodies continue to fill old roles. The show goes on, it repeats, but it also marks growth and difference.

The landscape has changed, too. Houses have changed colors and owners. Trees have fallen, swings been cut, fences unearthed. What we now know as "Sparky Park" at Grooms and 35th was once an industrial substation, later piles of dirt and grass. But rather than change the performance route, we have continually adapted the show to the changing landscape. Responding to the land in this way feels authentic to the rhythm of ordinary life.

I've also noticed myself change. I have aged; I can feel it in my bones and in my feet. I can feel it, too, in my temperament as an artist. I trust the process in a way I never have before.

Interestingly, one little thing has not changed. Hung from the brick facade outside the Church of Christ is a small black kiosk – the kind that typically announces worship times and pancake breakfasts. This kiosk, however, always says the same thing, and has for seven years:

In an odd way, it is the floodline of floodlines, this fixed mark on the landscape by which I am able to observe and measure the change all around it.

AC: What did you learn the most from doing the project in the way you did?

JP: I've learned how pure repetition is impossible, how every action, gesture, feeling, interaction, event is entirely original, ephemeral, fleeting. We have tried year after year to document floodlines with photography, video, film – which is difficult since the show takes place in multiple locations and so many things are occurring simultaneously. But being the humans that we are – so afraid of loss – we've tried again and again. Losing DV tapes and memory sticks and lots and lots of time and money. It begs the question: What is the nature of this desire to "capture" things in this way? What are we trying to hold onto? What are we afraid of losing? We are a culture obsessed with memory. But time slips and memory fails us again and again. This is what I've learned most of all, and I find it very beautiful, and devastating.

AC: Are you going to miss it?

JP: Yes and no. Yes, I am going to miss the creative process. I love directing on the streets, stopping traffic, waving at passersby, chatting with folks while they mow their lawns, carry groceries, take up the mail. I am going to miss this way of working, because I love it. But the piece itself has run its course and served its purpose. There is this fabulous quotation by a queer, black feminist writer named Jacqui Alexander that captures this process of repetition and return and cessation quite well: "We return to that place over and over until we don't need to anymore. We turn it over until we cease to need to turn it over." The project feels nearly complete, and that feels good.

'Floodlines'
I was in Hyde Park, but it wasn't Hyde Park ...

'floodlines': Hyde Park again awash in wonders
This Sunday, when Jaclyn Pryor's floodlines is presented again, the Hyde Park neighborhood will be abloom with mystery and have wonders wending their way down its streets