As usual, dancemaker Deborah Hay is making every moment count

Most artists have to wait until they've shuffled off this mortal coil to be the subject of a symposium (death giving academia that comfortable distance for rendering judgments). Not Deborah Hay. At the University of Texas on April 8, the pioneering dancer and choreographer will receive what you can only imagine will be her first day of many in the scholarly sun, with historians, teachers, and colleagues in the field of dance gathering to survey the trails Hay has blazed in modern dance, in work with communities, and in philosophy applied to movement. (See "'Beauty' Mark.")

Of course, getting a symposium about her work while she's still with us is just one more example of Hay departing from the norm and going her own way, doing what others haven't or wouldn't or can't. Case in point: At an age when many dance artists would be cutting back on the amount of work they make – and most would have long ago given up dancing altogether – Hay is more active than ever. Just last month, she was in Australia for a 10-day residency to develop solos for 10 dancers, then jetted to New York City to premiere No Time to Fly, a 50-minute solo commissioned by Danspace Project that she performed herself at St. Mark's Church in-the-Bowery. This month, Hay presents the same work in Austin the night before An Uncanny Beauty: A Celebration of Deborah Hay, then two weeks later takes it to Utrecht, Netherlands, for the Springdance festival, where she will also premiere a work she's choreographed for 40 dancers at the School for New Dance Development, then she's on to Brussels, Belgium, for a week. And before the summer is over, she will have spent several weeks in Helsinki, Finland, creating a new dance for seven Finnish choreographers and 10 days in Findhorn, Scotland, for another round of the Solo Performance Commissioning Project, the program through which she's been creating solos for individual dancers for a dozen years now. If this isn't the most productive period of Hay's career, it's bound to rival any other. And it's certainly the time in which she is receiving the most attention and accolades.

That may be hard to imagine, given that we're talking about someone who first made her mark as one of the fearlessly experimental choreographers of the Judson Dance Theater. That legendary band of firebrands, whose ranks included Yvonne Rainer, Steve Paxton, Lucinda Childs, Trisha Brown, and Elaine Summers, among others, is now widely credited with changing the course of modern dance (or laying the foundation for postmodern dance, if you prefer) through their experimentation with avant-garde elements such as chance, fragmentation, collage, game structures, and improvisation, as well as a shared belief in the beauty of the ordinary that could make dance out of everyday movement. But however deep and broad and long-lasting the impact of the Judson group ultimately proved to be, the collective itself did what it did in an intense, very concentrated burst – just two years, 1962-64 – after which most of the group's members continued their explorations of the form in other places and through other outlets. There was scarcely time to appreciate what Judson Dance Theater was before it was gone – as ephemeral as the groundbreaking dances its members created.

Hay kept up her own revolutionary work, but by the end of the decade, she more or less took herself off the grid, moving away from New York City and the racing heart of the American modern dance scene. She was in Vermont for a few years and then, in 1976, came to Austin, a town with an open attitude and a strong creative streak but not quite a hotbed for contemporary dance. And for most of her time here, Hay has not exactly been treated like a leading light in late 20th century dance – not that she was unknown around town, but Austinites responded to her in that casually accepting manner they do so many figures of stature and celebrity who find their way here: A nod, a s'cool, then they're on their way. And with the city never having embraced modern dance with the sort of popular enthusiasm that even classical dance has, Hay was largely invisible in her own backyard. Her first quarter century here contained some remarkable achievements – 15 years of running the Playing Awake workshops, in which she would work with trained and untrained dancers for four straight months to create a new movement piece; a Guggenheim Fellowship in 1983; writing the books Lamb at the Altar: The Story of a Dance (1994) and My Body, the Buddhist (2000); and a striking series of solo dances (The Man Who Grew Common in Wisdom, Voilà, The Other Side of O, Fire, Boom Boom Boom) – but they earned relatively little in the way of local notice.

Hay continued to present work outside Austin, and as time went on and the influence of the Judson Dance Theater continued to grow, her reputation grew. It got a big boost in 2000, when Mikhail Baryshnikov commissioned Hay to create a work for his White Oak Dance Company (including a duet for him and Hay), and the next year presented Past/Forward, a program that showcased dances by Judson Dance Theater choreographers, and toured it across the nation. But Hay's big breakthrough came with The Match, Hay's 2004 work for four dancers, in which they dance from a set of instructions that each one interprets in as individual and unique a manner as possible, and from which the individual dancers create their own solo adaptations of the group dance. The work had the support of a Joyce Theatre artist residency for its creation and the Danspace Project for its premiere, which earned a Bessie, aka the New York Dance and Performance Award. The dance toured to Austin, Houston, London, and Paris, and the Rude Mechanicals adapted it into a theatrical piece, Match-Play. That seemed to spark a new level of interest in Hay's work around the world, leading to greater interest in the Solo Dance Commissioning Project, more international commissions for her, recognition abroad such as the honorary degree of Doctor of Dance that she received from the Theater Academy in Helsinki, Finland, last fall – and widespread anticipation for her new work. "If I could see only one show this spring," wrote Claudia La Rocco in The New York Times in March, "I'd be hard pressed to talk myself out of 'No Time to Fly,' a new solo choreographed and performed by the singular Ms. Hay." And after the piece was performed, her colleague Gia Kourlas had this to say: "Moving with the weird delicacy of an anime figure, Ms. Hay may shift her rhythmic approach as she advances along a swirling path, but as an explorer of ephemeral states, she takes charge of each moment."

That is no small part of the "uncanny beauty" of Deborah Hay's work and of her life: She is ever aware of the ticking clock, of the motion of the atoms that mark our journey through the cosmos, and it fills her every movement with purpose. Thus, her idiosyncratic, odd, silly, graceful, and gracious movements, gestures, and expressions awaken in us a fresh appreciation, perhaps even wonder, for this existence and how we move through it.

"Do any human beings ever realize life while they live it – every, every minute?" Emily asks the Stage Manager in the final minutes of Our Town.

"The saints and poets, maybe – they do some," he replies. 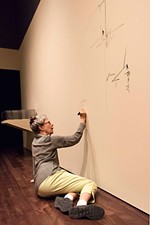 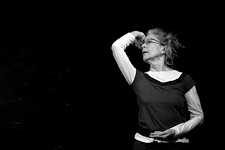 Deborah Hay, An Uncanny Beauty: A Celebration of Deborah Hay, No Time to Fly, UT Center for Women's and Gender Studies