A comedy serving up (micro)chips and salsa

Growing up in South Texas, actress/playwright Erica Saenz knew a thing or two about family, Mexican-American style. The daughter of immigrant parents and the fourth of five children, she knew about the bonds, the conflicts, the expectations, and the burdens of family. But it wasn't until she heard an NPR report about a Wisconsin law barring microchips from being planted in employees that an idea began to brew.

"I'd heard of chips being planted in dogs," she says over chilaquiles at Curra's. "But in people?" She'd heard of "nanny cams." Now she was hearing about "granny cams" in nursing homes. Saenz was intrigued with the good intentions as well as unexpected consequences of electronic surveillance. And when it comes to family, where the line between your personal business and everybody's business can be uncomfortably fuzzy, well, it was just a matter of time before her fascination with high tech surveillance and family dynamics would coalesce. The result is her play Keeping Track, the next production by Teatro Vivo.

The title has a dual meaning, referencing the literal electronic tracking of people and all the annoying and loving ways family members watch out for one another. Keeping Track centers on two couples, Janet and Albert and Jack and Melinda. Janet is desperate to have some long overdue privacy with her husband, which requires her mother-in-law move out of their house. Melinda has been a stay-at-home mom planning to return to the work force until she makes a startling discovery: She likes being a stay-at-home mom. The fact that the couples are mixed (Mexican-American and Anglo) adds to the sometimes conflicting family expectations. Serious topics, yet Keeping Track approaches them with a sense of humor.

"For such a stern and scary man, Lee Abraham taught me so much about comedy," Saenz says affectionately of her onetime professor in the University of Texas Department of Theatre & Dance, where she studied acting. "He taught me about timing and the value of silence." She further developed her comedy chops and began to write as a founding member of the Latino Comedy Project – a five-year stint that ended when her then-new husband Victor Saenz was accepted to graduate school at UCLA. While in Los Angeles, Saenz did the rounds, going to auditions and landing acting gigs, but she found her interest in writing ripening. She applied to and was one of a handful of students accepted in the UCLA School of Theater, Film and Television's dramatic writing program, where she received her Master of Fine Arts in 2008 and where Keeping Track was first produced.

"I was glad to see that it translated really well to a predominantly white audience," Saenz says, "but I kept thinking: 'This would play so great in Texas. I need to get this produced in Austin.'" The opportunity came when her husband, a newly minted professor, accepted a teaching position at UT. She approached Teatro Vivo about Keeping Track because of their "openness to new, innovative, and young work."

Although Saenz is appreciative of precursors – namely the more politically driven Teatro Chicano – her focus, along with local playwright Raul Garza, whose award-winning Fantasmaville was produced by Teatro Vivo in 2008, is distinctly different: "I think there is an almost desperate need for modern Latino theatre in this country, theatre that speaks to a broader base, Latino and non-Latino. As a writer, it's a fine line to walk because although we want to tackle modern topics, we can't ignore the inequity and discrimination that exists, and we don't want to leave our culture – language, values, traditions – behind or exclude them. I think both Raul Garza's and my work are proof that a balance can be reached."

Fortunately, it's the imbalances that make for good theatre. With the collective wisdom of her training and experience, the supportive environment of Teatro Vivo, and no lack of humor and grace, Saenz is ready to explore many more facets of the contemporary Latino experience. 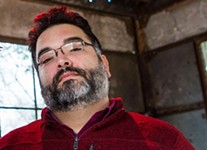