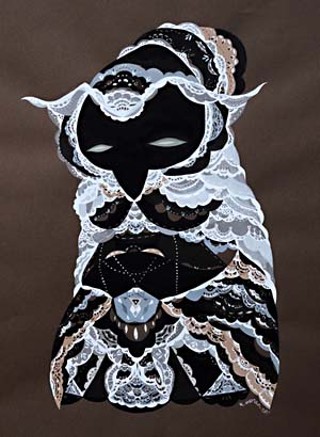 Yes, the art-album emporium called Domy Books sometimes displays the creations of street-poster artists and graffiti heroes and DIY punk scribblers; the store revels in the trips and tropes of the underground zine scene at least as much as it celebrates the more heady stratosphere of highbrow art and graphic design. True, as they say, dat. But don't think for a second that the "Lady Monsters" show of new works by Houston native and now Austin resident Katy Horan contains anything like the polychrome abominations of Ed Roth's gearshift-grappling Rat Fink or the ganked pop-image perversions of early Frank Kozik.

"My characters are made of hand painted lace patterns that mimic decorative elements and structural forms of Elizabethan and Victorian costume," says Horan in her artist's statement. "The lace is intricately detailed and painted in soft pastel shades to represent both my attraction to ornamentation and conventions of feminine beauty. There is conflict, however, between the lacy frills and the inhuman nature of the characters themselves."

There is no conflict, however, in the mind of this reviewer when regarding Horan's exhibition: This is visually attractive and narratively compelling work. While the veils of gouached lace serve to cover up what ugliness is implied by the word "monster" – like a variation of the way burquas and other such camouflagey overdressings of women are meant to cover up their tempting beauty – the beauty of these paintings is there for all to see. It's there in the obvious care taken with the detailed painting, in the balance of the figures on their backgrounds of thick brown paper, in the muted colors that overlap like so many layers of costuming history, in the forethought required to plan such storied ornamentation upon a formerly blank surface.

The word "monster" brings images automatically to your mind. These works by Horan – effectively arranged as singles when large and in quartets or triplets when smaller – will force a reimagining of those images. These paintings, besides greatly pleasing the eye, can invoke a reconsideration of what may or may not be monstrous and of what disguises – sartorial and otherwise – might be used to misdirect us from the fact of monstrosity.